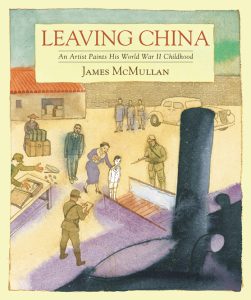 A memoir in paintings and words by internationally acclaimed illustrator, author, and teacher James McMullan. Artist James McMullan’s work has appeared in the pages of virtually every American magazine, on the posters for more than seventy Lincoln Center theater productions, and in bestselling picture books. Now, in a unique memoir comprising more than fifty short essays and illustrations, the artist explores how his early childhood in China and wartime journeys with his mother influenced his whole life, especially his painting and illustration. James McMullan was born in Tsingtao, North China, in 1934, the grandson of missionaries who settled there. As a little boy, Jim took for granted a privileged life of household servants, rickshaw rides, and picnics on the shore—until World War II erupted and life changed drastically. Jim’s father, a British citizen fluent in several Chinese dialects, joined the Allied forces. For the next several years, Jim and his mother moved from one place to another—Shanghai, San Francisco, Vancouver, Darjeeling—first escaping Japanese occupation then trying to find security, with no clear destination except the unpredictable end of the war. For Jim, those ever-changing years took on the quality of a dream, sometimes a nightmare, a feeling that persists in the stunning full-page, full-color paintings that along with their accompanying text tell the story of Leaving China.