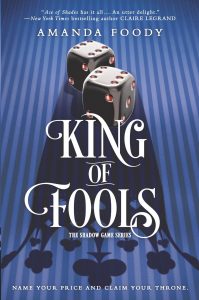 The morning following the Shadow Game, the newspaper headlines in New Reynes are crying out for blood. The chancellor was assassinated by the street lord pair Levi Glaisyer and the mysterious character of Séance, and the Senate has called for a complete extermination of the gangs before the political election in three months to maintain their appearance of control.

In the ten days Enne Salta has spent in this morally decrepit city, she’s lost everything–her mother, her innocence, and her identity. Though she is determined to uncover more of her mother Lourdes’ secrets, Vianca Augustine demands she use her new persona as Séance to further Vianca’s political goals. Enne is forced to become a proper street lord, and use her underlings to inspire the North Side to the monarchist cause. Thanks to Vianca’s omerta, Enne has no choice but to obey. And even if she could go home, she’s killed two people and would make those same decisions again–maybe she was never much of a lady at all.

As they consolidate their power in the North Side, Enne and Levi’s partnership eventually blossoms into romance, but there’s a lot they don’t talk about. Like the eerie hallway dreams they both continue to share. The unsettling rumors they hear about the House of Shadows or a devil who was born there. Or the night they both nearly died during the Shadow Game. But the true test of their relationship comes when Vianca orders Enne to commit murder once again—and break Levi’s heart in the process.