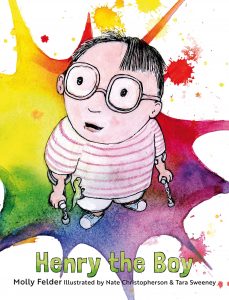 In Henry The Boy by Molly Felder with illustrations by mother-son team Tara Sweeney and Nate Christopherson, Henry uses forearm crutches decorated with animal stickers. He sometimes feels out of place at school, but through his own rich imagination and his friendship with Joel, Henry learns to define himself on his own terms.