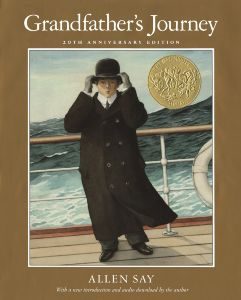 When he was a young man, Allen Say’s grandfather left his home in Japan to explore the world. He began his journey by crossing the Pacific Ocean on a steamship, then wandered the deserts, farmlands, and cities of North America. Allen Say lovingly tells the story of his own family’s cross-cultural history in elegant watercolor paintings that earned him a Caldecott Medal in 1994. This twentieth-anniversary gift edition of the modern classic features downloadable audio and an introduction by Allen Say.