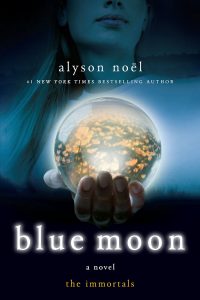 The second book in Alyson Noël’s dazzling new “Immortals” series.  Perfect for fans of P.C. Cast, Melissa Marr and Stephenie Meyer! Eager to learn everything she can about her new abilities as an Immortal, Ever turns to her beloved Damen to show her the way.  But just as her powers are increasing, Damen’s are decreasing.  He’s growing ill, losing his memory and becoming increasingly distant. In an attempt to save him, Ever travels to the magical dimension of Summerland, where she learns the secrets of Damen’s tortured past…a past which he has always kept hidden from her.  But in her quest to cure Damen, Ever discovers an ancient text that details the workings of time.  Now Ever must chose between turning back the past and saving her family from the accident that claimed their lives—or staying in the present and saving Damen, who grows sicker with each passing day…