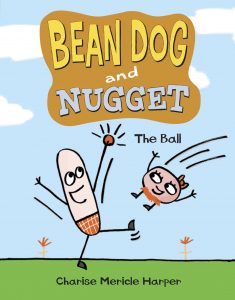 In The Ball, the first book in this series, Bean Dog and Nugget lose Bean Dog’s shiny new ball in a bush. They dream up elaborate and silly ways to get it back while they argue about who is actually going to go and get it. Enter Superdog and Ninja Nugget for a hilarious ending that kids will love and relate to.