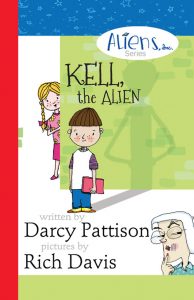 Shipwrecked on earth and desperate to make money, an alien family decides to make a living by opening Aliens, Inc., an intergalactic event-planning business master-minded by 9 year old alien boy, Kell Smith.
Kell discovers that his neighbor, Bree Hendricks, turns 9-years-old next month and she wants a party with an alien theme. That should be simple as flying from star to star. But things aren’t that easy: Earthling’s ideas about aliens are totally wrong. Even worse,
Principal Lynx is a UFO-Chaser and suspects aliens around every corner.
Will the Aliens totally blow the Aliens Party? Will Principal Lynx capture Kell and his family and them over to the government?

Publisher’s Weekly called this book “amusing” and “engaging and accessible.”