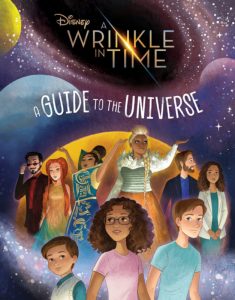 A Wrinkle in Time: Guide to the Universe

Here’s your chance to experience the fantastical world of A Wrinkle in Time, the upcoming film from Walt Disney Studios. This colorful book is filled with never-before-seen looks at the characters and places.

Get the chance to experience the fantastical world of the upcoming Walt Disney Studios film, A Wrinkle in Time. From the alien Aunt Beast to the skies of the planet Uriel, from the celestial beings known as Mrs. Which, Mrs. Whatsit, and Mrs. Who to the mysterious Happy Medium, this book brings the characters and places from A Wrinkle in Time to life, with stunning full-color illustrations throughout.