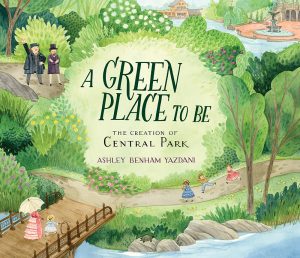 A Green Place to Be

In 1858, New York City was growing so fast that new roads and tall buildings threatened to swallow up the remaining open space. The people needed a green place to be — a park with ponds to row on and paths for wandering through trees and over bridges. When a citywide contest solicited plans for creating a park out of barren swampland, Calvert Vaux and Frederick Law Olmsted put their heads together to create the winning design, and the hard work of making their plans a reality began. By winter, the lake opened for skating. By the next summer, the waterside woodland known as the Ramble opened for all to enjoy. Meanwhile, sculptors, stone masons, and master gardeners joined in to construct thirty-four unique bridges, along with fountains, pagodas, and band shells, making New York’s Central Park a green gift to everyone. Included in the end matter are bios of Vaux and Olmsted, a bibliography, and engaging factual snippets.