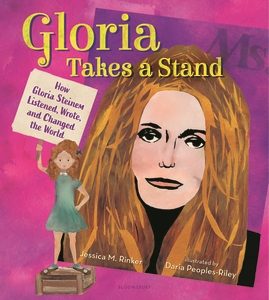 Gloria Takes a Stand: How Gloria Steinem Listened, Wrote, and Changed the World

Perfect for fans of I Dissent comes an inspirational and empowering account of the life of women’s rights icon Gloria Steinem.

As a young girl, Gloria Steinem thought for herself and spoke her mind. She read many books by her favorite authors and imagined herself as the heroine of the story.

Gloria wished. She read. And imagined.

But Gloria grew up during a time when women were not encouraged, or even allowed, to do a lot of the things men could do: go to college, get a job, open a bank account, and more. There were restrictions that made it impossible for women to be independent or equal to men. So, Gloria set out to change that . . .

Gloria listened. She watched. And wrote.
Gloria believed. She marched. And dreamed.

From unconventional childhood, to Smith College, to Ms. magazine, to the women’s liberation movement, to feminist icon–Gloria Takes a Stand brings to the page a spirited look at Gloria Steinem’s influential life, energizing a new generation of feminists to stand up and demand equal rights for all people.oets, feminists, and activists.