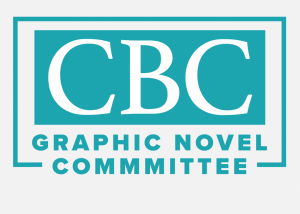 On October 13, the CBC Graphic Novel Committee presented their graphic novels at a debut YA Buzz Panel. Watch the video today and find here the great books recommended by the panel.

When Brooke, Kelly, Maggie, and Melissa buy a bootleg anime DVD at a gas station, they get much more than they bargained for with Super Love XL, a risqué move featuring—among other things—a giant mecha who shoots lasers out of her chest. The four girls are horrified (and maybe a little fascinated). It’s so unlike anything they’ve seen, would probably shock everyone else in their town, and definitely would take over their extremely conservative Christian school. That’s when they have the idea to sell copies to local boys…for twenty dollars a pop.

Isabel “Izzy” Crane and her family have just relocated to Sleepy Hollow, the town made famous by—and obsessed with—Washington Irving’s legend of the Headless Horseman. But city slicker-skeptic Izzy has no time for superstition as she navigates life at a new address, a new school, and, with any luck, with new friends. Ghost stories aren’t real, after all….

Numb to This: Memoir of a Mass Shooting, by Kindra Neely (Little, Brown Books for Young Readers)

This searing graphic memoir portrays the impact of gun violence through a fresh lens with urgency, humanity, and a very personal hope.

Kindra Neely never expected it to happen to her. No one does. Sure, she’d sometimes been close to gun violence, like when the house down the street from her childhood home in Texas was targeted in a drive-by shooting. But now she lived in Oregon, where she spent her time swimming in rivers with friends or attending classes at the bucolic Umpqua Community College.

Riverdale meets Stranger Things in this debut queer YA graphic novel, developed from a hit webcomic. Set in the haunted town of Blackwater, Maine, two boys fall for each other as they dig for clues to a paranormal mystery.

In 2115, Earth has been abandoned as a lost cause, and humankind has moved on to space colonization. At a decrepit high school on the moon for underprivileged youth, Stab, Yuki, and Una are three teenagers who try to keep their boredom and resentment at bay by fighting rival gangs and cliques, hanging out, and sleeping their way through class, all while trying to avoid punishment from the student council. Fights over turf, respect, and snacks lead to unearthing an exciting secret, but is their friendship strong enough to forge a new future?

The Nightmare Brigade is a dream team led by Professor Angus. With his two young sidekicks, 14-year-olds Esteban and Tristan, they have one goal: help people get rid of their worst nightmares. With unique skills, the team members can literally infiltrate their patient’s nightmare to seek its root and destroy the cause. Things are shaken up a bit, however, when they meet the young Sarah. The Brigade has a feeling they have seen her before! Then, an insomniac is invading other’s dreams. How does he do it and how can he be stopped? It’s a paranormal story you won’t want to sleep on!

In this queer, paranormal YA graphic novel debut from the author of Some Girls Do and the illustrator of Wonder Woman: Warbringer, a young witch races to solve the grisly supernatural murders of her coven members before the killer strikes again.

Check out our previous post: Debut YA Graphic Novels to Watch.