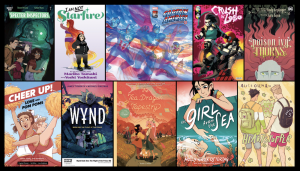 Happy Pride! To add to the celebration throughout the month of June (and beyond) the comic industry is releasing some amazing new titles featuring gay, lesbian, bisexual & transgender characters.

Comic books have always been a wonderful form of storytelling; the collaboration of art, writing, lettering, and editing put these labors of love in our hands week in and week out. This list of new and upcoming books showcases the extraordinary and superpowered as well as the characters that feel like people we all know. These books unify and uplift and bring a little bit of joy into our daily lives.

The Tea Dragon Tapestry (Oni Press) by Katie O’Neill is the latest “Tea Dragon” book, the feel-good all-inclusive graphic novel series will have you weeping with joy. (June 1)

Specter Inspectors (Boom! Studios) is a paranormal adventure book that features as writer Bowen McCurdy says best, “This book is everything I wanted to read when I was young; queer characters on adventures, ghosts, romance, and only a handful of demons.” (October 13)

Wynd: Book One: Flight of the Prince (Boom! Studios) by writer James Tynion IV and artist Michael Dialynas is a queer-led fantasy coming-of-age story that will have readers feverishly flipping the page. (April 21)

Heartstopper: Book Three (Graphix) by Alice Oseman continues the story of Charlie and Nick and their journey together. This title speaks to greater themes of love, mental illness, and navigating the world both separately and together. (February 6)

The Girl from the Sea (Graphix) by Molly Knox Ostertag is a queer coming-of-age romance with stunning art and a heartwarming story about a girl named Morgan and a selkie named Keltie trying to navigate first love and how to balance feelings, friends, and following your heart. (June 1)

The United States of Captain America (Marvel Comics) by writer Christopher Cantwell and artist Dave Eaglesham finds Steve Rogers and Sam Wilson on a road trip searching for a mysterious being who has stolen the Captain America Shield. In their travels, they find “The Captains,” everyday people from all walks of life who’ve taken up the mantle of Captain America to defend their communities. The first Captain we meet is called Aaron Fischer, a gay teenager created by Cantwell, Jan Bazaldua, and Joshua Trujillo, who will “stand for the oppressed, and the forgotten.” This will be released on June 30.

List compiled by CBC’s resident Graphic Novel and Comics expert, John McCormack. Check out other diverse book lists on our blog and from our Inclusivity Resources list.