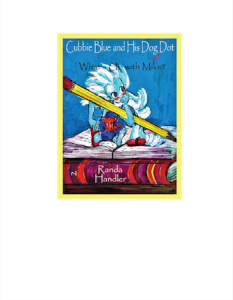 Randa Handler is a journalist, author and publisher of Cubbie Blue. She writes and illustrates Early Reader books to instill in kids an appreciation of diversity. In this interview, she talks about the differences in her animal characters from If I Were King and how she plots storylines staring diverse friends.

What inspired you to write children’s books with multiracial characters?

Fighting racism in any society begins by teaching children to love differences, in themselves and in others.  Racism and hate are learned behaviors. Working as an international journalist and at the United Nations allowed me to meet people from different cultures and make great friendships. It is always easier to hate a stranger than a friend, right? That inspired me to create children’s books that help to embrace differences. There is still a void in children’s lit when it comes to melting pot storylines involving multiracial characters. Children need to see themselves in the storylines they’re reading. I try and populate my children’s books with multiracial characters for that reason. I believe that you need to expose children to society’s true structure, in a loving way. Then, children will find it easier to embrace others who are different. They will be happier as they grow older and create in the process a better harmonious society.

How do you introduce diversity into your storylines?

I introduce diversity through multiracial characters, storylines and visuals. That’s why I opted for including illustrations to reflect them as opposed to chapter books. In The Cubbie Blue and his Dog Dot series, parents and educators can talk diversity by virtue of the diverse characters, from the tiny size of the creatures, their color, to the multicultural backgrounds of the boys.

That series follows three multiracial seven-year-old boys with varied backgrounds as they befriend a super-wise visitor from an enchanted part of Antarctica, tiny Cubbie Blue and his minuscule dog, Dot. Even though appearing vulnerable, he has supernatural powers and has an uncanny ability to only see things in a positive light. Children enjoy the storylines of discovery of unlikely diverse friends solving together, small and big, problems. To me, the tiny creatures are effective vehicles for conveying subtle messages, about rights and wrongs within the frame of an exciting and entertaining story. Many topics are tackled from bullying, to stuttering to global warming.

In other books I write, like If I Were King, a Mom’s Choice Award winner, different jungle animals talk about their differences as we follow a feisty zebra’s search for happiness who doesn’t want to hang with other zebras and embraces being different and having a giraffe as a best friend. In the book The Boy Who Spoke to God a young Greek boy, in this non-religious folk tale, helps feuding, Greek, Mayan, Zulu and Chinese tribes who don’t agree on how and when to celebrate their different holidays, find peace and embrace each other’s beliefs without changing their own.