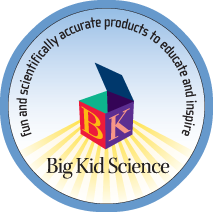 The books for which 100% of proceeds will be donated are: I, Humanity, The Wizard Who Saved the World, Max Goes to the Space Station, Max Goes to the Moon, Max Goes to Mars, and Max Goes to Jupiter. All six books have won numerous awards, including being selected for the Story Time From Space program in which they have been read by astronauts from the International Space Station; videos of the readings are posted freely at www.StoryTimeFromSpace.com. All six are available in both English and Spanish. More information about the books can be found at www.BigKidScience.com.

In announcing this action, Bennett said: “I wrote these books with the hope that they would inspire our youth to imagine the world as it could be, and I have always included a diverse set of characters because everyone will need to work together to build such a world. In light of recent events, I’ve decided to try to further this goal by donating the proceeds from these books to support the education and empowerment of Black youth. I’ve chosen to make this donation through the National Urban League because of their long history of supporting these goals, and because I had the opportunity to work with them in the past at the time when I worked for
NASA.”

Marc H. Morial, President & CEO, of the National Urban League, commenting on Dr. Bennett’s donation stated: “The National Urban League believes that learning happens everywhere – whether in schools, in our communities or with programs such as our Project Ready signature
program. In these times, it is more important than ever that our youth have access to learning opportunities that can enrich their lives and understanding of what is possible. We appreciate Dr. Bennett’s commitment and generosity.”

Dr. Bennett and Big Kid Science encourage other authors, publishers, and businesses to consider similar actions that might help our nation live up to its ideals.

About the National Urban League
The National Urban League is a historic civil rights organization dedicated to economic empowerment, equality, and social justice. Founded in 1910 and headquartered in New York City, the Urban League collaborates at the national and local levels with community leaders, policymakers and corporate partners across to elevate standards of living for African Americans and other historically under-served groups. With 90 affiliates serving 300 communities in 36 states and the District of Columbia, the Urban League spearheads the development of social programs and authoritative public policy research, and advocate for
policies and services that close the equality gap.

About Big Kid Science
Big Kid Science publishes scientifically accurate children’s books designed to fire children’s imaginations to dream of building a better world in the future. Big Kid Science is also the creator of the Totality app, a free app that helped tens of thousands of people find their way to the 2017 total solar eclipse and can also be used for future eclipses, and of a free, online curriculum for Middle School Earth and Space Science.

About Author Jeffrey Bennett (@JeffreyOBennett)
Astrophysicist/educator Jeffrey Bennett holds a B.A. in Biophysics (University of California, San Diego) and an M.S. and Ph.D. in Astrophysics (University of Colorado, Boulder). In addition to writing children’s books, he is the lead author of college textbooks in astronomy, astrobiology,
math, and statistics, and of critically-acclaimed books for adults including A Global Warming Primer, On Teaching Science, Math for Life, What is Relativity?, and Beyond UFOs. Other career highlights include serving 2 years as a Visiting Senior Scientist at NASA Headquarters, co-leading
the creation of the Voyage Scale Model Solar System on the National Mall in Washington, DC., and founding Big Kid Science. For a deeper look at his motivations, please see his personal mission statement.

Tags: On Our Radar