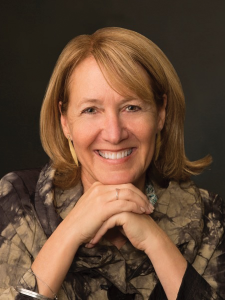 How does it feel to have your recently published book, Honey Girl the Hawaiian Monk Seal be included in the list of 2018 NSTA-CBC Outstanding Science Trade Books?

Thrilling! I’m very honored our book was included on this list of amazing books.
I choose to write nonfiction books because I want to share true stories that are not only compelling and inspiring, but also informational. And the true rescue story of HONEY GIRL is one that I hope will inspire children to care more about endangered and threatened species, and learn what causes such animals to be in danger. I grew up in Southern California and visited the beach often. I always wished I could have a pet seal. Of course, now I tell children that the best place for marine mammals is out in the ocean, not in my bathtub. But I still feel my dream came true because I’ve had the opportunity to write a story about a seal.

When I wrote this book, I carefully researched the story of Honey Girl, including interviewing scientists and veterinarians who were involved in her rescue. I wanted to be certain the story was as accurate as possible. And the publisher also uses experts to vet the story.

One of the many things I love about publishing books with Arbordale is that at the end of the book there is a wonderful mult-page section filled with more information, much of it scientific, called “For Creative Minds.” The sections include additional information, such as the Hawaiian Monk Seal’s life cycle, habitat, feeding patterns, and conservation efforts. I’ve found that children who become emotionally connected to this true rescue story then want to gobble up all the information they can about Hawaiian monk seals and ways to protect them. 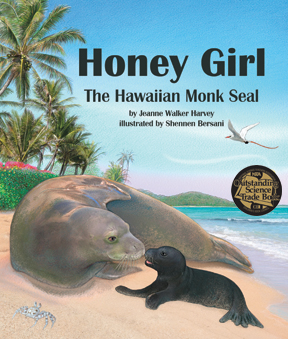 What inspired you to write a book about a Hawaiian monk seal?

I was visiting the North Shore of Oahu with my two sons one summer, and early in the morning went for a walk along the beach. I spotted a seal lying motionless on the sand, and I actually thought it was hurt or sick. But I was told by volunteers who quickly surrounded it with a protective fence made of rope that it was a Hawaiian monk seal (which I had never heard of before). I was told the seal was perfectly healthy, and had just hauled out of the ocean to rest and soak up some sun, Hawaiian style. I immediately wanted to learn more about Hawaiian monk seals.

I was excited to discover that The Marine Mammal Center (in Sausalito, California) that had rescued Astro the Steller sea lion (the topic of my first book with Arbordale) had recently established a rescue and rehabilitation facility for Hawaiian monk seals in Kailua-Kona on Hawai’i Island. This healthcare facitility is called Ke Kai Ola meaning “The Healing Sea.” As soon as I returned from my trip, I reached out to the incredibly dedicated people at The Marine Mammal Center, and they helped me with my research leading to the story of Honey Girl.

And I learned that it was possible that the monk seal I saw that morning may have been Honey Girl or one of her children because monk seals often return to the same beaches. And that particular beach at Turtle Bay was one of Honey Girl’s favorite spots!

Both of your marine mammal books published by Arbordale Publishing have been illustrated by Shennen Bersani. How is it working with her as the illustrator?

Shennen is an amazing illustrator and her style is perfect for these books! She carefully researches the topics before she begins her illustrations. For example, with Honey Girl the Hawaiian Monk Seal, she travelled far from her Boston home to visit Oahu where the story takes place. She visited the various sites, such as the beaches where Honey Girl was rescued and released, and the Waikiki Aquarium and Honololu Zoo where she was treated for her fishing hook wounds. And she met with many of the volunteers who carefully track the Hawaiian monk seals every day.

She carefully included and illustrated the settings, plants and other animals of Oahu.

Many people don’t realize that the author of a children’s picture book does not generally have a say in selecting the illustrator. Instead, the editor and art director of the publisher makes the selection after a manuscript has been purchased. I was thrilled that Shennen Bersani was selected for my first marine mammal book – Astro the Steller Sea Lion. I requested that Shennen illustrate the Honey Girl book, and fortunately both Arbordale Publishing and Shennen agreed.

When I visit schools, libraries, and bookstores, children are always fascinated by the details and beauty of Shennen’s illustrations. It’s truly special to be part of a team with her. When I look at her amazing illustrations, I feel I’m transported to Hawaii and can almost smell the fragrant soft breezes.

And the other thing that I tell children is that a picture book doesn’t just involve an author and an illustrator. There is a whole team of people at the publisher who work on the book and make it happen – editors, designers, people who connect with schools, libraries, bookstores, and those who publicize the book. And I appreciate every single person!

About Jeanne Walker Harvey
Jeanne Walker Harvey is the author of several award-winning books, including Astro: The Steller Sea Lion and My Hands Sing the Blues: Romare Bearden’s Childhood Journey. She’s been a language arts teacher and currently gives school tours at a local museum. Jeanne lives near the Golden Gate Bridge in California and walks by the bay every day looking for sea lions. She writes with her gray tabby cat sitting on the desk next to her. Visit her website at www.jeanneharvey.com