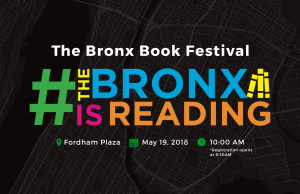 On Saturday, May 19, the first ever Bronx Book Festival took place at Fordham Plaza in Bronx, NY. This wonderful literacy initiative was founded by Bronx native and book publicist Saraciea Fennell. Both David Gilmore, CBC Marketing Assistant, and I were excited to attend the festival as volunteers.

The love, energy, and support we felt that day was incredible. So many diverse authors were present, ranging from picture book all the way through middle grade and young adult. Authors included Sharee Miller (Princess Hair), Vashti Harrison (Little Leaders), Karuna Riazi (The Gauntlet), Daniel José Older (Shadowshaper Cypher), Elizabeth Acevedo (The Poet X), Mark Oshiro (Anger is a Gift), Adam Silvera (They Both Die at the End) and many more. Picture book readings took place on stage, along with select readings in Spanish, as well as drawings by picture book authors. Picture book author Sharee Miller read from her latest book Princess Hair, and after drew a portrait of a girl, Janeice, from the audience, who happened to be Saraciea’s niece! This interaction was not only fun but also very impactful, as many kids do not have access to writers, so the one-on-one opportunity that this festival provided is a powerful and life changing one.

Not only did the kids feel loved, understood, and included, but the adults attending the festival also had a fantastic time listening to various panels and hearing writers talk about experiences that they could relate to. The panel topics included writing as a queer author of color, what it’s like to publish a book, writing from the immigrant perspective and more.

At one point, author NoNieqa Ramos of The Disturbed Girl’s Dictionary, mentioned that as a child growing up in the Bronx, her teachers told her that her personal story wasn’t important. It was the books in school the kids were reading, that did not reflect her own experiences, which were vital. As a writer now, NoNieqa is turning this idea on its heels, because let’s face the facts: Everyone’s story is hugely significant to our understanding of the world, society, and human experience. Every story, of every background needs to be seen and heard, and the Bronx Book Festival did a phenomenal job of portraying the diversity of experiences to festival attendees on Saturday.

With the warm and powerful sense of community, the passion from the festival organizers and attendees, the first Bronx Book Festival was absolutely incredible, and I am already looking forward to the next one. It’s an amazing and successful accomplishment in giving the Bronx community more access to writers and books, opportunities that are more prevalent in places like Brooklyn and Manhattan, but are now expanding to the Bronx as well thanks to The Bronx is Reading initiative. A big shout out to Saraciea and her team of organizers and to everyone who has supported this festival and made it happen. Looking forward to the next one!

Check out photos from the festival below! (Photo credit: photos taken from The Bronx Book Festival Twitter.)

Don’t take our word for it! See what everyone else is saying about the Bronx Book Festival in the fantastic coverage below: