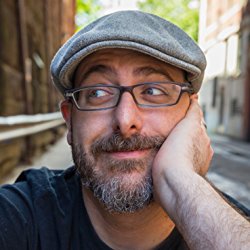 What made you write a fractured fairy tale?

I’ve always been intrigued by the ridiculousness of some fairy tale premises. Did Little Red Riding Hood really not recognize that a wolf had taken her grandmother’s place despite the big teeth, big eyes, etc? Did Hansel and Gretel really not realize that animals might eat their breadcrumb trail? And a house made of straw, little pig #1? Come on!

Worst of all is Jack from Jack and the Beanstalk. He makes so many terrible, questionable, and frankly unbelievable decisions – and then even more ridiculous things happen. Let me list them for you:

I simply couldn’t live in a world where no one pointed out these absurdities. And that’s why I wrote It’s Not Jack and the Beanstalk.

Why did you choose to cross the fourth wall and make it meta?

Who better to point out the inconsistencies in the story than the characters themselves. If I were Jack, there’s no way I would attempt any of those things list above. So when the narrator in It’s Not Jack and the Beanstalk tries to tell the “traditional” story, Jack fights back – requiring the narrator to go off script in an attempt to get Jack to do what he’s supposed to do.

But the real reason I wrote this book is because I want to make the reader look foolish. The way I see it, most picture books are meant to be read aloud – usually by an adult to a child. And one of the best ways to get kids laughing is to make adults look silly.

And how could I do that? Make the adult have to argue with a book. Who doesn’t want to see their teacher have a whiny stomping fit during read aloud time? So watch out! You will be embarrassed when reading It’s Not Jack and the Beanstalk (in a good way). Don’t say I didn’t warn you.

Do you have any advice for aspiring authors?

I’m a software engineer. In 2011, when my kids were 3 and 6 and I was reading a ton of books to them, I made an important decision: I stopped playing fantasy football and started writing picture books. The first manuscript I wrote was really really … terrible. But I took classes, went to workshops, and kept writing. So my second manuscript was … a little less terrible. But I didn’t give up.

After several years, my writing improved and I learned a lot about the business of publishing. Eventually, a single editor found the manuscript for Lady Pancake & Sir French Toast in a slush pile, and that would eventually be my first book.

So my best advice for aspiring authors, young and old, is to keep writing new stories. Don’t get hung up on a single manuscript and revise it to death. Keep learning more and more – take classes, read lots (hundreds) of books in (and out of) the genres and age groups you write for. Take what you learn and write something new. Your new stories will start off from a much better place than your earlier work, now that you’ve learned so much.

Because if I’ve learned one thing, it’s that there’s always more to know. Break a pencil!

About Josh Funk
Josh Funk is the author of the popular picture books Lady Pancake & Sir French Toast and its sequel, The Case of the Stinky Stench, illustrated by Brendan Kearney; Dear Dragon, illustrated by Rodolfo Montalvo; and the upcoming It’s Not Jack and the Beanstalk, illustrated by Edwardian Taylor and How to Code a Sandcastle illustrated by Sara Palacios in partnership with Girls Who Code. Josh lives in New England with his wife and children. Learn more about him at www.joshfunkbooks.com, and follow him on Twitter @joshfunkbooks.