Home > Blog > The author of the recently…

The author of the recently released WILD THINGS answers three questions for the CBC! 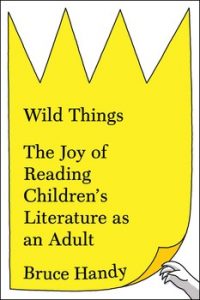 1. Wild Things hit shelves just as you were doing the college rounds. What’s it been like seeing that family narrative kind of come full circle? And how are you handling all the nostalgia between those two different, yet somewhat similar, life events?

It feels like a cosmic irony that I published Wild Things literally a week before my wife and I became empty nesters–although my publisher might not think “irony” is quite the right word, given that if I had turned in the manuscript when it was contractually due, my daughter, Zoë, would have been a senior in high school and my son, Isaac, would have still been in middle school. But anyway….

I think for me, launching the book right now has helped with the “grieving” process of the kids leaving home, as both a distraction and an inadvertent but very gratifying yardstick to take stock of how my children have grown, and how we’ve grown as a family. The seeds of Wild Things were planted when I was reading to my children when they were very young, and now that they’re adults, they themselves have become great readers, devouring all kinds of fiction and non-fiction, reading for enlightenment as well as entertainment. That’s thrilling to me and also to my wife, Helen Schulman, who is a novelist.

One publication event was especially meaningful to me: the kids and I did the NPR show Studio 360 together, along with the host, Kurt Andersen, and his two daughters, Lucy and Kate, who are in their 20s. We all had a great time doing the show, and it made me so happy that Zoë and Isaac were able to participate in the launch of the book. They are the book’s secret stars, or maybe not so secret.

2. The book is very much a look at classic children’s and Young Adult works, but did you discover any contemporary illustrators and/or authors who caught your attention?

Oh absolutely! I firmly believe we are living in a golden age of children’s literature, especially in terms of picture books, which I keep up with more than chapter books and middle-grade and young adult works. I’m a huge fan of Kevin Henkes, who I called a “genius” in the New York Times Book Review several years ago–a superlative I have never regretted! His latest book, Egg, published earlier this year, is an astonishingly inventive work of visual narrative. I’d teach it if I taught a class on making picture books.

Kadir Nelson is another contemporary favorite. Isaac, who is a big baseball fan, introduced me to Nelson’s book on the Negro Leagues, We Are the Ship (2008), which is both visually stunning and a gold standard for literary non-fiction for children. I also treasure my 40th anniversary edition of Mildred D. Pierce’s novel Roll of Thunder, Hear My Cry, which Nelson illustrated.

My current go-to baby gift is They All Saw a Cat, written and illustrated by Brendan Wenzel, which came out last year. It’s his first book, and has a clever conceit about perception that reminds me of Eric Carle but also feels totally original. Meanwhile, just yesterday, I was browsing in the kids’ section of my local Barnes & Noble (Upper West Side, New York City) and found four recently published picture books which were new to me and which I thought were exceptional:

This Beautiful Day, by Richard Jackson, illustrated by Suzy Lee. (Lee’s wordless and wonderful Wave, published in 2008, was my go-to baby gift before They All Saw a Cat.)

A Different Pond, by Bao Phi, illustrated by Thi Bui.

My Daddy Rules the World: Poems About Dads, written and illustrated by Hope Anita Smith.

All these titles are well worth your time–and that’s just the bounty from one random trip to a Barnes & Noble. As I said, I think we’re living through a golden age of children’s literature.

3. You can bring 3 of your subjects to dinner. Who are you inviting and why?

I love this question! First off, I would invite Margaret Wise Brown, because she was a genius and also because she sounds like she was a lot of fun—a Carole Lombard-style screwball heroine come to life. She supposedly kept a pet flying squirrel in her Greenwich Village apartment, plus a pet goat, and once blew an entire advance on a cart of flowers she used to fill her flat. She was exuberant, eccentric, knew everyone worth knowing in mid-century Manhattan, and from what I’ve read had a real talent for living. She had troubles, too, but don’t we all?

For my second guest, I’d invite Maurice Sendak, because he too was a genius. I’m guess from the interviews I’ve read—and he was a very generous interviewee—that he was also a genius conversationalist: witty, acerbic, always frank. Constitutionally, he was gloomy and dyspeptic, qualities that I think would pair intriguingly with Brown’s joie de vivre at my imaginary dinner table. They might have butted heads at times, but I think they would have also seen eye to eye on a lot of things. Both had a rare intuitive empathy for children’s concerns and perspectives; both combined that empathy with uncommon craft and discipline.

My third guest would Laura Ingalls Wilder. I’m not sure she was an artist in the same sense my other two guests were, but few writers have fashioned as compelling and enduring a narrative from their own lives as she did. Having fallen for the “character” of Laura Ingalls in her Little House books—her daring, her love of nature, her eagerness to meet the world head on, and also her less noble but exceedingly human qualities (jealousy, a taste for revenge)–I would love to meet the real woman and see how she compared to Laura on the page. Ingalls Wilder was socially and politically conservative, so I don’t know how well she’d get on with the more cosmopolitan Brown and Sendak, at least at first; but I think by dessert they’d be seeing eye to eye and getting on famously. All three were edited by the great Ursula Nordstrom at what is now Harper Collins, so they could break the ice gossiping about the “boss.”

Bruce Handy is currently a contributing editor of Vanity Fair. Prior to joining the magazine in 1999, he was a senior writer and editor at Time, where he wrote a column on society and popular culture and edited the magazine’s arts coverage. His articles, essays and reviews have appeared in such publications as The New York Times Magazine, The New York Times Book Review, New York, Rolling Stone, Vogue, The Village Voice, and The New Yorker. He has also written several times for the New York Times op‑ed page. Handy began his career at Spy magazine as a writer and editor in 1986. His article “A Spy Guide to Post Modernism” was a finalist for a National Magazine Award in 1989. He was nominated for an Emmy in 1993 as a member of Saturday Night Live’s writing staff. He won a GLAAD Award in 1998 for his “Yep I’m Gay” cover profile of Ellen DeGeneres. At Vanity Fair, he has edited two National Magazine Award‑winning articles and has written on topics and personalities as diverse as Mad Men, Larry Flynt, the composer John Barry, PeeWee Herman, Miley Cyrus, the J.T. Leroy hoax, Cinerama, and the history of flight attendants. A native of California and a graduate of Stanford University, Handy lives in Manhattan with his wife, novelist Helen Schulman, and their two children. Twitter: @henryfingjames