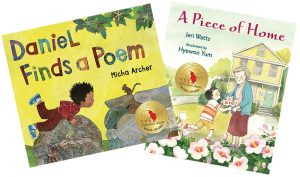 NEW YORK—February 23, 2017—The Ezra Jack Keats Foundation, in partnership with the de Grummond Children’s Literature Collection at The University of Southern Mississippi, announced today the winners of the 31st annual Ezra Jack Keats Book Award. Each year a writer and an illustrator are recognized early in their careers for their outstanding work. The 2017 award ceremony will be held on April 6th during the Fay B. Kaigler Children’s Book Festival at The University of Southern Mississippi in Hattiesburg. The winners receive a gold medallion as well as an honorarium of $1,000.

“Presenting the Ezra Jack Keats Book Award to new talents in children’s illustrated literature every year is a thrill. These writers and illustrators have created books that reflect the spirit of Keats in so many distinctive ways,” said Deborah Pope, Executive Director of the Ezra Jack Keats Foundation. “We are proud to honor artists whose books, like Ezra’s, are wonderful to read and look at and reflect our multicultural world.”

“The Keats Archives at the de Grummond Children’s Collection reminds us of the joy that Ezra’s books have brought to readers and the impact they have had on children’s book writers and illustrators today. Once again, we see that influence in the work of this year’s EJK Book Award winners. We are confident that they’ll join the long list of illustrious past winners whose books continue to delight and make a difference,” said Ellen Ruffin, Curator of the de Grummond Children’s Literature Collection.

Jeri Watts for A Piece of Home
Published by Candlewick Press

When Hee Jun’s family moves from Korea to West Virginia, he finds it difficult to adjust to his new life. Everything feels different, and he feels different from everyone. Eventually, Hee Jun learns English, and one day a classmate invites him home. He spots a familiar flower from his grandmother’s garden in Korea—mugunghwa (his friend calls it “rose of Sharon”). Hee Jun brings a shoot to his grandmother to plant a “piece of home” in their new garden. Jeri Watts’ lyrical prose combined with lovely illustrations by Hyewon Yum, a past EJK Book Award winner, tell a realistic story about making connections in an unfamiliar world.

Watts said, “My book is based on a true story—a few years ago, I taught a student who, like my main character, had moved from Korea. His struggles affected me deeply as I can only imagine how difficult it is to be displaced as a child, especially when you have no choice in the matter. Winning the Ezra Jack Keats Book Award is overwhelming, in a good way! The name Ezra Jack Keats means so much, and it’s hard for me to believe that I’ve written something other people in the publishing world respect and value in the way they respect Keats’ work.”

Influenced by the work of Ezra Jack Keats, Archer’s exquisite, colorful collages, created using handmade paper, celebrate the poetry found in the world around us. The story begins when a young boy named Daniel notices a sign on the park gate: “Poetry in the Park. Sunday at 6 o’clock.” Intrigued, he poses the question “What is poetry?” to his friends in the park—a squirrel, a cricket, and other creatures—and in their answers, he finds his own. As author and illustrator, Archer combines simple text with detailed images to introduce early readers to a richly textured world where everything from a cool pond to sun-warmed sand and moonlight on the grass is poetry.

Archer said, “I grew up in a small town and currently live in the woods, but my decision to set my story in a city park is a tribute to Ezra Jack Keats, who made books in which children who live in cities could feel seen and celebrated. I’m a person who learns best through pictures, so Keats’ clear, beautiful collage compositions became part of my early visual vocabulary, inspiring me to eventually work in collage myself. His keen understanding of the child’s point of view also deeply influenced the gentle and observant nature of Daniel, my little ambassador of poetry.”

To be eligible for the 2017 Ezra Jack Keats Book Award, the author and/or illustrator had no more than three children’s picture books published prior to the year under consideration.

Founded by the late Caldecott award-winning children’s book author and illustrator Ezra Jack Keats, the Ezra Jack Keats Foundation fosters children’s love of reading and creative expression by supporting arts and literacy programs in public schools and libraries; cultivating new writers and illustrators of exceptional picture books that reflect the experience of childhood in our diverse culture; and protecting and promoting the work of Keats, whose book The Snowy Day broke the color barrier in mainstream children’s publishing. Keats. Imagination. Diversity.

For more about the Foundation, please visit www.ezra-jack-keats.org.

The de Grummond Children’s Literature Collection at The University of Southern Mississippi is one of North America’s leading research centers in the field of children’s literature. The Collection holds the original manuscripts and illustrations of more than 1,300 authors and illustrators, as well as 180,000+ mostly American and British published books dating back to 1530. Since 1985, the de Grummond Collection has been the home of the Ezra Jack Keats Archive, which includes manuscripts, typescripts, sketches, dummies, illustrations and proofs for Ezra Jack Keats’ books.