Scholastic to Publish Updated Edition of J.K. Rowling’s ‘Fantastic Beasts and Where to Find Them’ By Newt Scamander 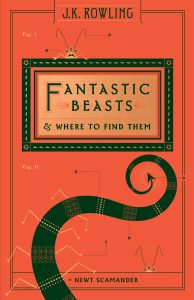 NEW YORK, NY — Scholastic Corporation (NASDAQ: SCHL), the global children’s publishing, education and media company, will publish an updated edition of the bestselling and collectible companion book to the Harry Potter books, Fantastic Beasts and Where to Find Them, with a new foreword by J.K. Rowling, writing as Newt Scamander, and a new cover by Headcase Design on March 14, 2017. The book will be published simultaneously with Bloomsbury UK and the Pottermore eBook edition.

Originally published fifteen years ago, now this book has been revisited by the author to bring the original classic up to date with new content that reflects the exciting developments in J.K. Rowling’s Wizarding World. The book served as the inspiration for the Warner Bros. major motion picture of the same name which marked J.K. Rowling’s screenwriting debut. Scholastic published the screenplay on November 18, 2016, and the book went to the top of bestseller lists nationwide.

Fantastic Beasts and Where to Find Them has been an approved textbook at Hogwarts School of Witchcraft and Wizardry since its publication. Newt Scamander’s masterpiece has entertained wizarding families through the generations and is an indispensable introduction to the magical beasts of the wizarding world. Scamander’s years of travel and research have created a tome of unparalleled importance. Introducing six new beasts, readers will have fun spotting them among the much-loved favorites. J.K. Rowling’s new introduction, written from the viewpoint of Newt Scamander, offers tantalising hints about the Magizoologist’s adventures and relationships. Some of the beasts will be familiar to readers of the Harry Potter books – the Hippogriff, the Basilisk, the Hungarian Horntail. Others will surprise even the most ardent amateur Magizoologist.

Proceeds from the sale of this edition will go to Comic Relief and J.K. Rowling’s own international charity Lumos, charities which help the world’s most vulnerable children and young people, to help them have a better life.

Scholastic will also release a re-packaged edition of the Hogwarts Library Box Set which includes the new edition of Fantastic Beasts and Where to Find Them as well as Quidditch Through the Ages and The Tales of Beedle the Bard, with a new case by Headcase design.

About J.K. Rowling
J.K. Rowling is the author of the record-breaking, multi-award-winning Harry Potter novels. Loved by fans around the world, the series has sold over 450 million copies, been translated into 79 languages, and made into 8 blockbuster films. She has written three companion volumes in aid of charity: Quidditch Through the Ages and Fantastic Beasts and Where to Find Them (in aid of Comic Relief and Lumos), and The Tales of Beedle the Bard (in aid of Lumos), as well as a film script inspired by Fantastic Beasts and Where to Find Them, her screenwriting debut, and a further extension of the Wizarding World, which was released as a Warner Bros film in November 2016. In 2012, J.K. Rowling’s digital company Pottermore was launched, where fans can enjoy news, features and articles, as well as original content by J.K. Rowling. Her first novel for adult readers, The Casual Vacancy was published in September 2012 and adapted for TV by the BBC in 2015. Her crime novels, written under the pseudonym Robert Galbraith, were published in 2013 (The Cuckoo’s Calling), 2014 (The Silkworm) and 2015 (Career of Evil), and are to be adapted for a major new television series for BBC One, produced by Brontë Film and Television. J.K. Rowling’s 2008 Harvard commencement speech was published in 2015 as an illustrated book, Very Good Lives: The Fringe Benefits of Failure and the Importance of Imagination, and sold in aid of Lumos and university–wide financial aid at Harvard. J.K. Rowling has recently collaborated with writer Jack Thorne and director John Tiffany on the stage play Harry Potter and the Cursed Child Parts One and Two, which is now running at The Palace Theatre in London’s West End. As well as receiving an OBE for services to children’s literature, she has received many awards and honours, including France’s Légion d’Honneur, and the Hans Christian Andersen Award.

About Comic Relief
Since 2001, Quidditch Through the Ages and Fantastic Beasts and Where to Find Them have raised nearly £20 million for Comic Relief- a magic amount of money that is already hard at work changing lives. Money raised through the sale of this new edition will be invested in children and young people around the world, preparing them to be ready for the future – to be safe healthy, educated and empowered. We are particularly interested in helping those children who start their lives in the most difficult circumstances, where there is conflict, violence, neglect or abuse.

About Lumos
Lumos is an international non-profit organisation founded by J.K. Rowling to help the estimated eight million disadvantaged children in orphanages around the world to be returned to their family or placed in a loving family environment. www.wearelumos.org

About Scholastic
Scholastic Corporation (NASDAQ: SCHL) is the world’s largest publisher and distributor of children’s books, a leading provider of print and digital instructional materials for pre-K to grade 12, and a producer of educational and entertaining children’s media. The Company creates quality books and ebooks, print and technology-based learning programs, classroom magazines and other products that, in combination, offer schools customized solutions to support children’s learning both at school and at home. The Company also makes quality, affordable books available to all children through school-based book clubs and book fairs. With a 96 year history of service to schools and families, Scholastic continues to carry out its commitment to “Open a World of Possible” for all children. Learn more at www.scholastic.com.