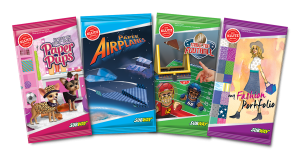 NEW YORK, NY — Klutz® announced today a promotion in which more than 30,000 Subway® restaurants across the United States, Canada, Aruba, and the Bahamas will be offering four exclusive Klutz activity-packs that will be included in Klutz-branded Subway Fresh Fit for Kids’ Meal® bags. The promotion will run on the following schedule:

Each Subway Fresh Fit for Kids’ Meal will each feature adapted content from one of the following Klutz titles: Dress Up Your Own Paper Pups, My Fashion Portfolio, The Klutz Book of Paper Airplanes, and The Encyclopedia of Immaturity.

“We’re excited by this promotion and the unique Klutz activity kits we’ve created with the Subway brand. From making your own table top football field to dressing up your very own paper pups, there’s something fun for every kid to enjoy,” says Klutz General Manager and SVP Stacy Lellos.

Founded in 1977, Klutz has been engaging kids for decades with more than 110 million activity products in print, including such popular and award-winning kits as Cat’s Cradle®, Face Painting, Juggling for the Complete Klutz, and The Klutz Book of Paper Airplanes. Klutz’s unique combination of crystal-clear instructions, custom tools and materials, and hearty helpings of humor has kick-started creativity everywhere. Klutz is an imprint of Scholastic, the world’s largest publisher and distributor of children’s books. For more information, please visitwww.klutz.com and http://mediaroom.scholastic.com/klutz. Follow Klutz on Twitter@KlutzBooks, on Facebook, on Instagram, on YouTube, and on Pinterest.

Guests in 112 countries have easy access to a fresh line-up of vegetables for their made-to-order sandwiches and salads at any of the more than 44,000 franchised locations. The company, founded 50 years-ago by then 17-year-old Fred DeLuca and family-friend Dr. Peter Buck, is still a family-owned business with thousands of dedicated franchisees/entrepreneurs in neighborhoods around the world, providing easy access to vegetables, detailed nutrition, dietary, and healthy lifestyle information. This has been a priority for the Subway restaurant chain for many years. To learn more, visit www.subway.com. Subway is a registered trademark of Subway IP Inc.