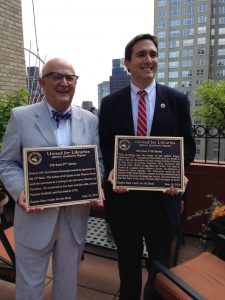 PHILADELPHIA, PA — United for Libraries, in partnership with the Empire State Center for the Book, recently dedicated two Literary Landmarks on the same New York City block.  The dedications, for Erich Maria Remarque and E.L. Doctorow,  occurred on June 18 on the 300 block of East 57th Street, and recognized two apartment buildings.

320 and 333 East 57th Street were selected by the Empire State Center for the Book and were supported by City Councilman Ben Kallos. The buildings were the homes of Remarque and Doctorow.  They become the 18th and 19th landmarks in New York State.

320 East 57th Street, the 1926 Art Deco building, was Erich Maria Remarque’s New York City home from 1951 until his death in 1970. The author of “All Quiet on the Western Front” lived there with his wife, the actress Paulette Goddard. His last novel, “Shadows in Paradise,”  was set in the building.

Members of the Doctorow family attended the dedication and two childhood friends spoke about Doctorow’s early years.  One of the friends was the actor Dominic Chianese, best known for his role as Uncle Junior in “The Sopranos.”

The Empire State Center for the Book, the New York State affiliate for the Library of Congress Center for the Book, has been very proactive in declaring Literary Landmarks.  In recent years the center has been the lead in the designation of the Cathedral of Saint John the Divine in honor of Madeleine L’Engle, the author of “A Wrinkle in Time,” and the windmill at the Southampton campus of SUNY Stony Brook, where Tennessee Williams resided for a summer. In 2014 a public school on East 88th Street in New York City was landmarked in honor of Bernard Waber, the creator of the picture book character Lyle the Crocodile. Lyle first appeared in a book titled “The House on East 88th Street,: