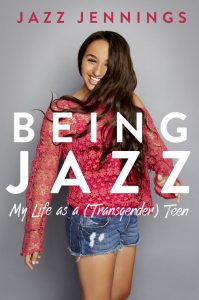 Named one of the 25 Most Influential Teens by Time the past two years and the star of the TLC docu-series I Am Jazz, Jazz Jennings transitioned to life as a girl, with the support of her parents, at the age of five. Her journey has been remarkable for its openness and positivity. She has been in the public eye ever since her first Barbara Walters interview at age six, and has been interviewed by Oprah Winfrey, Katie Couric, Meredith Vieira, and more—becoming one of the most recognizable advocates for transgender children, teens, and adults.

In BEING JAZZ: MY LIFE AS A (TRANSGENDER) TEEN, Jennings shares her very public journey and reflects on how these experiences have helped shape the mainstream attitude toward the transgender community. Now in high school, Jazz also addresses the physical, social, and emotional upheavals of adolescence, complicated by the unique challenges of being a transgender teen.

“I am very excited to be working with Random House and am so happy that BEING JAZZ will have a home there,” says Jennings. “This book reveals many rarely shared memories from my past that have molded me into the teenager I am today. I hope that my challenges and triumphs will resonate with readers of all ages, whether they are transgender or not.”

“Jazz is a remarkable young woman who has helped to foster major changes in the way the public views the transgender community while also being an average teen,” says Easton. “We are honored to be working with her to tell her extraordinary story, which will inspire people to accept the differences in others while embracing their own truths.”

Easton negotiated the deal for world rights with Joseph Veltre at The Gersh Agency on behalf of Jennings.

Jennings will narrate the audiobook edition of BEING JAZZ: MY LIFE AS A (TRANSGENDER) TEEN, available on CD and as a digital download from Listening Library.

JAZZ JENNINGS is a young trans woman, YouTube celebrity, spokesmodel, and advocate. She has a television series about her life called I Am Jazz on TLC, which started airing in July 2015 and will air its second season in 2016. She was named to Time’s “Most Influential Teens” list two years in a row, was one of Huffington Post’s “14 Most Fearless Teens,” and was the youngest person ever featured on Out’s “Out 100,” as well as on Advocate’s “40 Under 40” list. In 2014, she was named a Human Rights Campaign Youth Ambassador and received LogoTV’s Youth Trailblazer Award. She is the recent recipient of the Florida Equality: Voice of Equality Award and the Trevor Project’s Youth Innovator Award, and received the LA Children’s Hospital Youth Trailblazer Award. Jazz also hosts a series of videos about her life on YouTube and partnered with CLEAN & CLEAR® on the See The Real Me™ campaign.