Suzanne Collins Thanks the Team Behind the Hunger Games Films 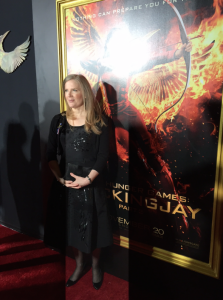 After the premier of the final film, Mockingjay Part 2, Collins expressed her gratitude to all involved in the production for bringing her message of war and social justice into the lives of young fans.

For me, The Hunger Games Trilogy is part of a larger goal to introduce the ideas of just war theory to young audiences, but how much wider and more varied an audience came with the films, and the credit for that goes to all of you who contributed so much to this project. (Scholastic)