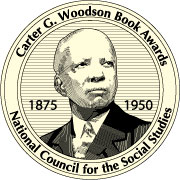 Submissions are now open for the Carter G. Woodson Book Award, presented by the National Council for the Social Studies for the most distinguished non-fiction books for young readers depicting ethnicity in the United States. There is no cost for entry.

Book Nominations must be postmarked by October 15, 2015.

Founded in 1974, the award honors non-fiction books that focus on the experience of one or more racial/ethnic minority groups in the United States and that appropriately, sensitively, and accurately address topics related to ethnic minorities. The awards are given at each of the elementary (K-6), middle (5-8) and secondary (7-12) levels.

This year is the 100th anniversary of the founding of the Journal of Negro History in 1915 by Carter G. Woodson, the notable black historian, author, and educator. The journal pioneered scholarly studies of the life and history of the African-American community at a time when they were ignored or misrepresented.

In 1926, Woodson designated the second week of February as Negro History Week to coincide with the birthdays of Abraham Lincoln (February 12) and Frederick Douglass (February 14). This commemoration was later extended to the entire month of February, becoming Black History Month.