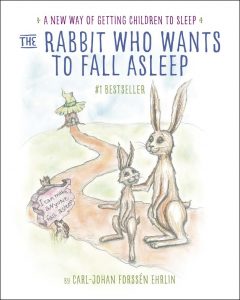 The new Penguin Random House print editions will go on sale Friday, October 2, with the ebook editions available on September 8, and will be available at physical and online retailers nationwide across the U.S., the U.K., Canada, Australia, New Zealand, India, and South Africa.

The Penguin Random House editions share a fresh cover design newly updated from that of the self-published edition.

Two additional stand-alone books written by Carl-Johan Forssén Ehrlin also have been acquired by the publishers. Information about them will be presented at a later date.

THE RABBIT WHO WANTS TO FALL ASLEEP has soared to the top of bestseller lists at numerous retailers internationally, including in the U.S. and the U.K., after receiving widespread media attention for its reported success in lulling children to sleep in minutes, by employing positive-reinforcement techniques to promote relaxation and induce sleep. Online parent testimonials affirm and rave about the speed and ease with which Ehrlin’s book has helped their children fall asleep.

Ehrlin’s bedtime story was originally published in Swedish in 2011. In 2014, an English translation was released, and it is now available in seven languages.

“We are so pleased to expand the availability and potential readership of Ehrlin’s captivating book in North America, and in the UK., together with our colleagues,” says Marcus. “We know there is a vast audience of eager parents that will both respond to and benefit from, The Rabbit Who Wants to Fall Asleep.”

“We’re thrilled to be publishing The Rabbit Who Wants to Fall Asleep—a phenomenon that’s grabbing people’s attention all around the world,” says Dow. “We are excited now to be bringing this book to an even bigger audience here in the UK and internationally. As a publisher we want to publish books that speak to people and have the power to support them. This book is very clearly doing that.”

Carl-Johan Forssén Ehrlin was born in Huskvarna, a small town in Sweden. He is a behavioral scientist with a bachelor’s degree in psychology and teaches communications at a Swedish university. He is also a life coach and leadership trainer. He has published three books with themes of personal development and psychology. THE RABBIT WHO WANTS TO FALL ASLEEP is his first for parents and children.