Booki Vivat: How I Got into Publishing 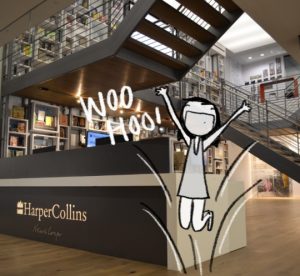 Let’s get this out of the way first.

Yes, I work in publishing.
Yes, my name really IS Booki.

Sometimes I joke that I got hired because of my name. Who knows, that might be kind of true.

To be honest, I didn’t plan on working in publishing. Actually, I didn’t plan on studying writing or literature, or anything book-related at all. At one point, I was heading towards biochemistry and pharmacy school. To be fair, at another time, I was thinking pretty seriously about becoming an elephant trainer.

One constant, though, is that I have always been a book person. When I was forced, (as we all eventually are) to really consider the future, I thought about what I liked and what I wanted to spend my time doing. It always came back to books.

I had no idea how to turn that into a legitimate career, so I combed my college database for even a whiff of the word “book.” For a while, I worked at an aquarium gift shop and bookstore which, despite the cute sea animal plushies and fantastic ocean view, was not exactly what I had in mind.

Eventually, my search led me to a literary agency in San Diego. I interviewed with the agent there and convinced him to let me hang around that summer as his intern. The office was like a gold mine of children’s literature—shelves filled with my favorite authors/illustrators, picture book artwork lining the walls, that sort of thing.

I had somehow stumbled into this world where I finally felt I belonged, and by the end of the summer, I was SOLD.

When I graduated, I contacted him again with an eager, but admittedly clueless email that went something like this: “Remember me? Your old intern? I still like books! I still want to work in publishing! What should I do?”

Okay, a little more professional and a few less exclamation points, but that was the gist of it. He gave me some encouraging advice and made a future in publishing seem like a real possibility—not an impossible pipe dream, but something I could actually do (and do well).

The fact is, though, I was in California and most of publishing was not. Moving to the other side of the country sounded hard, especially with student loans and no savings or job prospects. Plus, ever since I said I wanted to work in New York, it seemed like everyone felt obligated to warn me about how ruthless the city was and how difficult it was to get a job, let alone one in publishing.

So I moved to a different country. No, really, I did.

I taught English at a public middle school in South Korea partly as a post-grad quest for life experience and partly to save up money. Turns out, it also expanded my appreciation for children’s books and their ability to reach readers on such a profoundly massive scale in such a deeply personal way. My students and I bonded over stories that transcended our language barrier, age gap, and cultural divide. I never expected my extensive knowledge of the Wizarding World to earn me any sort of street cred, but hey, life is weird.

After two years, I moved to New York. I worked at a bookstore in the city and reached out to the agent once again: “Remember me? Your old, old intern? I still like books! I still want to work in publishing! I’m in New York—now what?”

Even though it had been years, my short summer internship helped connect me to former interns who made the same move and were now working in the industry. They then recommended me to an internship program at a prestigious literary agency in the city. There, I met even more amazing book people who helped me channel my love of reading into a more informed enthusiasm for the publishing world.

There is a lot to be said about cultivating relationships with people who recognize your potential and want to see you do well. These people are the best. They are the whole reason I’m even working in publishing now.

When a position at HarperCollins Children’s Books opened up, I applied despite knowing very little about book publicity. Somehow I got the job, and I’m sure it had a lot to do with the people who had been rooting for me the whole time.

My name might have helped too, so thanks Mom.

I realize my short “how I got into publishing” post has morphed into a rambling, nostalgic diary entry about how much I love publishing and the people in it, but maybe that’s okay.

After all, the one unanimous thing people told me when I said I wanted to work in publishing was, “You have to love it”.

And I guess I really really do.

Booki Vivat is currently an Associate Publicist at HarperCollins Children’s Books. She grew up in California and graduated from University of California, San Diego with a double major in Literature/Writing and Communications. She now lives in Brooklyn and is now steadily amassing her own personal library on the east coast. She doodles a lot.