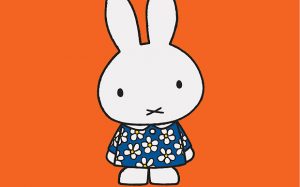 The inspiration for the now iconic rabbit came to Bruna in 1955 while on a family vacation to Egmond aan Zee in Holland. Every night the family saw the same bunny frolicking in their garden. After incorporating the bunny into nightly stories for his son, Bruna began to write the adventures of Miffy. Miffy (or Nijntje, ‘little rabbit,’ in Holland) has since starred in 32 books, translated into over 50 languages, with nearly 85 million copies sold.

Miffy’s universal appeal lies in her simplicity. The books are always square, with sides only 15.5cm long, so that eager young readers can hold them without help. Dick Bruna modelled his design on the refined colour palette and minimalist shapes of Matisse’s late collages, which he saw when he travelled to Paris as a young man: Miffy is a neat bundle of black lines and five colours…yet capable of conveying an incredible range of emotion. (The Telegraph)