Razorbill Acquires Sequel to An Ember in the Ashes, The New York Times Bestselling Novel by Sabaa Tahir 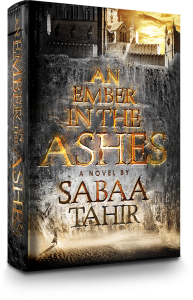 New York, NY — Razorbill, an imprint of Penguin Young Readers, has acquired the sequel to An Ember in the Ashes, the New York Times bestselling debut novel by Sabaa Tahir. An Ember in the Ashes hit shelves on April 28th to rave reviews that likened it to some of the past decade’s biggest blockbusters. In an interview titled “Why An Ember in the Ashes could launch Sabaa Tahir into JK Rowling territory,” PRI’s “The World” raved “An Ember in the Ashes… has the addictive quality of “The Hunger Games” combined with the fantasy of “Harry Potter” and the brutality of “Game of Thrones.” The Washington Post said, “This novel is a harrowing, haunting reminder of what it means to be human — and how hope might be kindled in the midst of oppression and fear.” The Huffington Post wrote, “An Ember in the Ashes glows, burns, and smolders–as beautiful and radiant as it is searing.”

Razorbill has tentatively scheduled the untitled follow-up for publication in April 2016, with an announced first printing of 250,000. Ben Schrank, President and Publisher, Razorbill, said, “We’re thrilled to announce this acquisition. The response to Sabaa Tahir’s debut has been so exciting and deeply gratifying. All of us at Penguin are very happy to promise Sabaa’s fans a second book in 2016.”

Sabaa Tahir said, “I’m overjoyed to announce that Book 2 officially has a home with Razorbill/Penguin. I love my characters like family, and cannot wait to share more of their story with readers.”

Set in a high-fantasy world with echoes of ancient Rome, An Ember in the Ashes tells the story of Laia, a slave fighting for her family and Elias, a young soldier fighting for his freedom. Both live under the control of the brutal martial Empire, where defiance is met with death. Laia risks everything in an attempt to save her brother by spying for the Rebels within Blackcliff, the Empire’s greatest military academy. There she meets Elias, the school’s finest soldier and secretly, its most unwilling. They soon realize that their destinies are intertwined, and that their choices will change the fate of the Empire itself.

In her next novel, Tahir takes readers into the heart of the ruthless Martial Empire as Laia and Elias fight their way north to liberate Laia’s brother from prison. Hunted by Empire soldiers and haunted by the events of An Ember in the Ashes, Laia and Elias must outwit their enemies and confront the treacherousness of their own hearts.