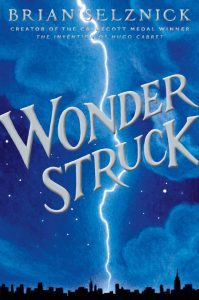 Selznick drew inspiration from a great number of sources for this project including an E. L. Konigsburg novel, a documentary called Through Deaf Eyes, and two exhibits at the American Museum of Natural History. In 2012, Selznick earned a Children’s Choice Book Award in the “Illustrator of the Year” category for this book.

Wonderstruck follows the intertwined narratives of two deaf children, Ben and Rose. Ben lives with his family in Minnesota in 1977, and runs off to New York following his mother’s death when a mysterious note shows up. Rose, who is locked in a house in 1927 New Jersey, also escapes to New York to see her idol, film actress Lillian Mayhew. (Entertainment Weekly)