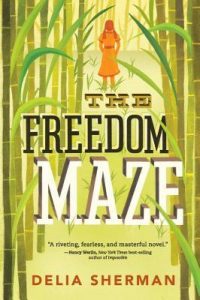 It’s 1961. I’m 10, and in bed reading a book. My mother isn’t telling me to go outside and play because, first, we live on the 11th floor in an apartment building in New York City, and second, because playing outside always makes me wheeze.

The book I’m reading could be anything—though, if I’m really sick, it’s likely to be The Swiss Family Robinson. The Swiss Family is mostly male and much older than I, but the practical details of their island life and the girl who has built her own house all by herself are endlessly fascinating to me.

This is my special comfort book, but I also love The Merry Adventures of Robin Hood and the Narnia series and the biography of Eleanor of Aquitaine from Mama’s nightstand, The Wind in the Willows, Nancy Drew, and A Wrinkle in Time. As an adopted only child, I find books about big, warm families of colorful siblings exotic and fascinating. But I like Little Men even more than Little Women. The boys of Plumfield School feel like a family even though they aren’t related by blood. I particularly identify with the musician Nathaniel, who is delicate and sensitive and lies a lot.

I’m a girl and I can’t read music, but I understand why he lies. I lie to stay out of trouble, too.

Some books act as mirrors—reflecting the reader’s experience—and some as windows—inviting readers to empathize with characters who may not look like them or think like them or share their beliefs or tastes.

Realistic novels of domestic life are the most obvious mirrors, but fantasies and historical fiction can be mirrors, too, and allow readers to see characters like themselves in the center of the action, solving problems, struggling against adversity, making decisions, and earning their happy ending—or tragically failing, but still being important, and above all, familiar. Window books are seldom comfortable or soothing, but they help us understand that, while we are not all the same, we are all human, with stories worth hearing.

Mirror or window is not an absolute state. A book like Virginia Hamilton’s Justice and Her Brothers is a mirror for some readers, a window for others. It is true, however, that most novels tend to reflect the dominant culture. In countries whose population is racially diverse and culturally heterogeneous this creates a terrible imbalance.

In the United States, there are plenty of mirror books written for male, educated, heterosexual, able middle class White Anglophone Christians. Women, LGBT people, people of color or different religions or languages or cultures or abilities are frequently pushed into the margins, cast in supporting roles, treated as exotic, dangerous, or inferior, misrepresented, or just left out completely. The books that mirror their lives and experiences are often assumed to be more formulaic, less interesting, less relevant, less important.

It’s the 21st Century now, and I’ve left my isolation behind in the 20th, along with my asthma. I write books as well as read them, and my stories mirror the things I’ve experienced and observed. My childhood in one of the most diverse and heterogeneous cities in the world is reflected in my two New York Between novels, Changeling and The Magic Mirror of the Mermaid Queen, set in a magical New York peopled by supernatural immigrants to the New World. The Freedom Maze, about a 1960’s white girl who goes back in time to her family’s plantation in 1860 and is taken for a light-skinned slave, is part of my lifelong struggle to understand and overcome the unthinking racism I grew up with.

Most of my stories contain characters of many colors, genders, ages, and sexual orientations because they are part of history—even Western European history. They show up in diaries, memoirs, census lists, cemeteries, and local records of all descriptions. Mirroring their experience opens a new window on our shared history, both good and bad.

Diversity is a fact. Books that don’t acknowledge it are not mirrors, but shuttered windows. In the real world, skin color, gender, physical ability, sexual orientation, or even religion and class, in no way limit intelligence, competence, leadership ability, or common sense—although studies suggest that marginalized people tend to be more empathetic and generous, perhaps because they encounter so many window books.

Delia Sherman was born in Japan and raised in New York City but spent vacations with relatives in Texas, Louisiana, and South Carolina. Her work has appeared most recently in the young adult anthologies The Beastly Bride: Tales of the Animal People; Steampunk! An Anthology of Fantastically Rich and Strange Stories; and Teeth: Vampire Tales. Her novels for younger readers include Changeling and The Magic Mirror of the Mermaid Queen. She lives in New York City.