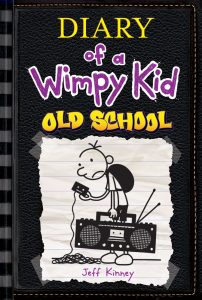 NEW YORK, NY — Amulet Books, an imprint of ABRAMS, today revealed the cover, title, and color of the biggest book of 2015, Diary of a Wimpy Kid: Old School. Author and creator Jeff Kinneyjoined an exuberant crowd of fans in New York City during a live webcast with over 500,000 viewers worldwide. The book’s November 3 global on-sale in 16 countries around the world will mark a milestone for a series that has topped bestseller lists around the world for more than eight years. The bold black cover featuring graffiti-style type and contrast stitching takes the series in a fresh new direction. The book will follow Wimpy Kid Greg Heffley as he goes on a weeklong field trip to a farm and deals with a generation gap between the kids and their chaperones.

“For the tenth book, I wanted to bring things back to basics,” says Jeff Kinney. “And nothing says ‘Old School’ for a cartoonist more than black, the color of ink.”

Sixteen international publishers will unite to simultaneously release and publish this milestone volume in the blockbuster Diary of a Wimpy Kid series. Book 10, an all-new, original story by bestselling author Jeff Kinney, will go on sale in more than 90 countries around the world on November 3, 2015. As it is one of the most anticipated books of the year everywhere, fans will cheer to hear it is on the way.

“Diary of a Wimpy Kid: Old School rocks the series in a whole new way,” says Michael Jacobs, president and CEO of ABRAMS. “This unprecedented global release promises to be the biggest book and book event of the year, not just in North America but around the world. The book and its simultaneous worldwide publication are both historic milestones in the incredibly popular and evergreen series. Diary of a Wimpy Kid continues to turn millions of kids on to reading everywhere.Old School will do the same and more!”

Today’s reveal wraps up the second annual Wimpy Kid Month, which began on April 1 with a multifaceted campaign that included national publicity and advertising, dedicated retail promotions, and much more. Special appearances by Jeff Kinney included presentations to over a thousand fans at the Los Angeles Times Festival of Books and to booksellers at the second annual American Booksellers Association Children’s Institute. Materials for teachers and librarians offered activities for curriculum that incorporated Diary of a Wimpy Kid and encouraged readers to exchange ideas and favorite moments.

In November, bestselling author Jeff Kinney will embark on an unprecedented tour around the world, a first for the series. Jeff will be featured in international media and will meet tens of thousands of fans during author events held in major venues. All publicity, marketing, and social-media promotions will be coordinated on a global scale with all publisher partners.

Published in 2007, the first Diary of a Wimpy Kid book was an instant bestseller, and just a year later, more than 100,000 copies were in print in the United States alone. With each subsequent book, in-print numbers continue to grow exponentially both here and abroad. The ninth book, Diary of a Wimpy Kid: The Long Haul, sold over 2 million copies in all formats around the world in its first week. There are more than 150 million copies of the series in print. The book series has won five Nickelodeon Kids’ Choice Awards.

The Diary of a Wimpy Kid series has been a fixture on the USA Today, Wall Street Journal, and Publishers Weekly bestseller lists. The series has remained on the New York Times bestseller lists since the publication of the first book, for more than 400 weeks total, and more than 300 on the series list. The books have been sold in more than 44 territories in 42 languages. Published by Amulet Books, an imprint of ABRAMS, Kinney’s work has been widely praised for its ability to turn reluctant readers on to books. Jeff Kinney was named one of Time magazine’s most influential people in the world. Three movies based on the book series have grossed more than $250 million internationally. Jeff Kinney won two Children’s Choice Book Awards. Books in the series have won numerous awards voted on by students and teachers around the globe. The Wimpy Kid Island (Wimpy Wonderland) on poptropica.com, a virtual world for kids, remains one of the most visited on the site.

Founded by Harry N. Abrams in 1949, ABRAMS is the preeminent publisher of high-quality art and illustrated books. Now a subsidiary of La Martinière Groupe, ABRAMS is the publisher of bestsellers such as the wildly popular Diary of a Wimpy Kid series by Jeff Kinney, the award-winning cookbooks of Alton Brown, and the stunning photography of Yann Arthus-Bertrand’s Earth from Above. ABRAMS publishes books in the areas of art, photography, cooking, interior design, comics, craft, fashion, sports, and pop culture, as well as children’s books and general interest. The company’s imprints include Abrams; Abrams Appleseed; Abrams ComicArts; Abrams Image; Abrams Noterie; Abrams Books for Young Readers; Amulet Books; Stewart, Tabori & Chang; and STC Craft/Melanie Falick Books. www.abramsbooks.com.