There's a Party in Your Head and Everyone's Invited 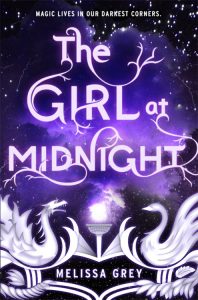 There are seven narrators in The Girl at Midnight – a fact I wasn’t very open with during the querying process because I was worried the number might scare off potential agents. My thinking was that by the time someone read enough of the manuscript to discover just how bonkers I went with the number of point-of-view characters, they would either be invested enough in the story or they’d already soured on it. The gamble paid off.

Because there are so many narrators, I’m often asked how I approach writing a single story with so many PoV characters. I’m not always fastidious when it comes to writing methodology but these are a few points to keep in mind when writing different perspectives (especially when they’re different from you in terms of sex, gender, race, culture, etc.).

It is not a single story

You’re the star of your own life, right? Well, that’s how your characters feel about their lives, even if they’re not the book’s main character. Every character is the hero of their own story, even the villains. No one thinks of themselves as the side dish. So, even if a PoV character has only a single chapter in a book of sixty, they should still have their own perspective on the story. They need their own motivations, their own desires, their own outcomes. When I was plotting out The Girl at Midnight, I made a list of what each character wanted more than anything and what they actually got in the end (so often, the two are not the same). Each character thinks the story is theirs. It’s important to be mindful of that.

Research is key. It’s always critical, no matter what you’re writing, but it’s absolutely essential when you’re writing an experience different from your own. I am not a gay man, but there is one in my book, so I did my homework. I’m dealing with mostly nonhuman characters in The Girl at Midnight trilogy but ideas of racism, bigotry, and prejudice are still a part of it, so I did that homework too; even though I have personal experience with prejudice (I’m a woman and not white), my experience is not universal. Reading fiction and nonfiction about and, more importantly, by people different from you is so, so, so important. It will inform how your characters approach the world of your book and the problems in it.

Write outside the box (or book)

One of the strategies that really helped me get inside the heads of so many characters was writing stuff that was never going to be in the book. I used to write fan fiction (ain’t no shame in it!) and one of the common types of fic is called Five Times Fic. It’s basically short stories like Five Times Harry and Draco Kissed and One Time They Didn’t. Each ‘time’ is usually short, maybe 100-200 words depending on the writer, so it’s all about those slice-of-life moments that show you the heart of a character. I wrote drabbles like that for several of the characters in The Girl at Midnight when they were proving elusive (Caius was a bit slippery sometimes) and it was such a fun way to get to know them. I didn’t have to worry about building a whole plot or impressing my writing partners or wowing an editor. Those little side stories were for my eyes only and they really, truly helped. I find they’re also a great way to combat writer’s block. And they’re just plain fun. Fun is so essential. Writing a book is hard, but that doesn’t mean it can’t be fun!

Melissa Grey was born and raised in New York City. She wrote her first short story at the age of twelve and hasn’t stopped writing since. After earning a degree in fine arts at Yale University, she traveled the world, then returned to New York City where she currently works as a freelance journalist. To learn more about Melissa, visit melissa-grey.com and follow @meligrey on Twitter.