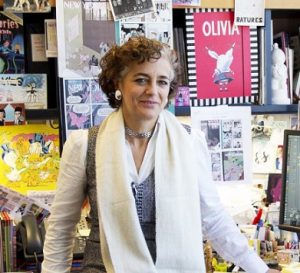 After moving to the United States from Paris in 1974, Mouly began reading comics as a way of absorbing the language. Comics offered her a kind of cultural and emotional literacy: “I think a lot of what I get from books -— whether they be books of comics or books of literature -— is a window into somebody’s mind and their way of thinking…It’s a new way to look at the world.”

Mouly’s love for the art form grew when she met her future husband and collaborator, Art Spiegelman. Mouly later transitioned from the underground scene to working as art editor of the New Yorker, though she remains committed to publishing bold images that spark conversation. In 2008, Mouly founded TOON Books, an independent publisher of comics for children that reimagines early readers.

I tend to want to publish things that don’t exist, that nobody else does…We’re doing everything we can to actually get our books in the hands of kids who don’t necessarily have parents who would be reading books to them at home. I’m more concerned about them getting good books.(Guernica)