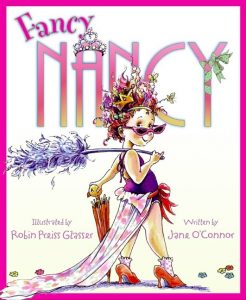 Burbank, CA/New York, NY – “Fancy Nancy,” the New York Times bestselling book series by Jane O’Connor and Robin Preiss Glasser, has been optioned by Disney Junior for development of an original animated TV movie and series, as well as for related role-play items and other consumer products licensed by Disney Consumer Products.  In addition, HarperCollins and Disney Publishing will collaborate on book editions based on the television series. The announcement was made today by Nancy Kanter, Executive Vice President, Original Programming and General Manager, Disney Junior Worldwide, and Susan Katz, President and Publisher, HarperCollins Children’s Books.

The stories, geared towards kids age 2-7, have an underlying theme of self-expression and love of family as they follow the adventures of a girl who likes to be fancy in everything from her creative, elaborate attire to her advanced vocabulary.

Kanter said, “Children have been captivated by Fancy Nancy’s wit and irrepressible spirit for a decade and we are very eager to give her an even bigger stage on which to perform.”

Katz said, “We are thrilled to be collaborating with Disney Junior to bring Fancy Nancy to the small screen and to the next generation of fans.  As we celebrate the 10th Anniversary of this bestselling series, it’s exciting to see our beloved character making her TV debut.”

O’Connor said, “This is definitely one of those ‘pinch me’ moments. When Robin and I met Nancy Kanter and her team, we knew instantly that Disney Junior was the plus-perfect home for Fancy Nancy.

Preiss Glasser said, “After the thrill of seeing my two-dimensional drawings of Nancy and her ‘world’ come alive in spin-off musicals and ballets, the opportunity to see her animated by Disney is a dream I never would have dared to dream!”

Now in its 10th year, “Fancy Nancy” includes over 60 titles, has sold more than 28 million books and has been translated into 20 languages.  Beloved by young children around the world, Fancy Nancy was named 2008’s Book Character of the Year by Global License.  The series has received two Toy Industry Association’s Toy of the Year Award nominations, two LIMA International Licensing Excellence Award nominations and was named the Best Character Brand Program of the Year in 2009.

Disney Junior reflects the emotional connection generations of consumers have to Disney storytelling and Disney characters, both classic and contemporary. It invites mom and dad to join their child in the Disney experience of magical, musical and heartfelt stories and characters, while incorporating specific learning and development themes designed for kids age 2-7. Disney Junior’s series blend Disney’s unparalleled storytelling and characters kids love deeply with learning, including early math, language skills, healthy eating and lifestyles, and social skills. In the U.S., Disney Junior is a daily programming block on Disney Channel and a 24-hour channel reaching over 220 million U.S. homes.  In total, there are 34 Disney Junior channels in 26 languages around the world.