Home > Blog > A Letter of Gratitude to…

A Letter of Gratitude to Walter Dean Myers 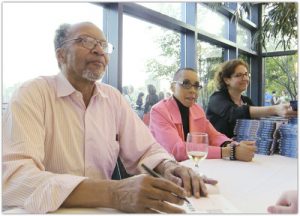 In a letter addressed to the late Walter Dean Myers, Andrea Davis Pinkney — VP and Executive Editor of Trade at Scholastic — introduces next week’s “It’s Possible” series, where five inspiring publishing professionals will share a little bit of their experience with Walter and how working with him helped push his goal of more diverse literature forward. Check back every day next week for new posts.

You always had a story to tell. One of my favorites was about the time you spent as a child with your foster mother reading True Romance magazine. This was the beginning of your beginning. Hearing stories being read aloud made an impression that lasted a lifetime. You called this childhood introduction to reading a gift.

I remember thinking, Walter, you are a gift. Around that time, you were writing Sunrise Over Fallujah, a novel that centers on the war in Iraq, and is the second novel in what has come to be called your “war trilogy.” It is the stunning companion to your seminal Vietnam War novel, Fallen Angels. With each stage of the editing and revision, you delivered your gift ―  you poured keen insight into those pages, and made us think about war’s devastating effects. Your gifts continued to come forth while we worked together on your middle grade Cruisers series, and then on one of your final novels, Invasion, a book set during World War II, which completes your war trilogy.

Yes, yes, Walter, you are a gift who shared your deepest self.

You were a Renaissance man from Harlem. And, like a fascinating rhythm on the A train to 125th Street, you brought us along on your Renaissance ride, as beautiful as the jazz played in the uptown neighborhood you so often celebrated in your books.

As an author who is still learning my craft, I sought your advice on the stories I’d written and how best to render them. Walter, you are a gift who told me that the books we write shape a child’s self-image, and have a lasting impact on the souls and psyches of young readers. When I was invited to deliver my own May Hill Arbuthnot Honor Lecture, I cried out to you with great anxiety and trepidation about its crafting and delivery. How would I ever follow in your awesome footsteps?  In your wisdom, you reminded me that we each have our own footsteps, and that positivity can walk us through any experience. Yes, yes, Walter, you are a gift that encourages all of us to step into our own stories, and to use these to move forward while helping others along the way.

I’ll always remember the day you came to Scholastic to spend time with a group of African American boys who were visiting from the University of Illinois at Chicago’s reading clinic. These young men called themselves “brother authors,” and they wanted to be just like Walter Dean Myers.

You treated them as if they were your own brothers, and let them know they were already like you, because they’d found themselves through reading and writing. The boys were especially intrigued by your Newbery Honor and Coretta Scott King Honor Award-winning Somewhere in the Darkness, and they wanted to know what it’s like to win so many medals. You were quick to point out that even with your glittering list of prizes, you weren’t in it for the fame. You were in it for the love of the game.

That’s why those kids loved you and why we love what your message continues to do. You’ve changed the game forever. Through Somewhere in the Darkness, and every book you wrote, you gave a gift that lets us see past darkness. You generously lit a path for the next writer and reader on the road.

In 2012, you were named The National Ambassador for Young People’s Literature. Through your platform, you reminded us that “reading is not optional.” During your tenure, you worked with Every Child a Reader and the Children’s Book Council on the planning and direction of your term. As a member of the Children’s Book Council’s Diversity Committee, I watched with awe as you fielded endless invitations, reviewing each with your eyes on the prize that mattered most ― literacy. You were also an active participant in the CBC Diversity initiative. Your blog post on Authentic Voices was one of the most visited posts in the history of the CBC Diversity “It’s Complicated” forum. That’s because you brought to it your gift of authenticity.

Yes, yes, Walter, you are a gift who constantly showed us that all children matter, and that hope can be found in an open book.  At the same time, you dared to ask, “Where are People of Color in Children’s Books?” in your New York Times Opinion piece. That simple question rocked a very heavy boat, and forced all of us to batten down our hatches so that we could ride together on the high seas thrusting forward among the winds of change.

And now, Walter, as we embark upon the three-year anniversary of your appointment as National Ambassador for Young People’s Literature, we celebrate you with a series of guest posts by five members of the publishing community who worked alongside you. Each shares a bit of their experience with the gifts you brought to them, and how these helped advance the goal of more diverse books. Over the course of the next week, your literary agent, Miriam Altshuler; two of your esteemed editors, Phoebe Yeh and Regina Griffin; Virginia Anagnos, your long-time publicist and Executive VP at Goodman Media; and Jennifer Brown, Director of the Center for Children’s Literature at the Bank Street College of Education, will share their memories.

One of the last projects that you and I had the pleasure of working on together was Scholastic’s Open a World of Possible campaign. As part of the  initiative, you wrote a story entitled “I Am What I Read” that was published in an anthology of real-life stories.

In your piece, you say: “Once I began to read, I began to exist.” Yes, yes, Walter, you are a gift who reminded us that our very existence ― our living and breathing and giving to others ― happens when we experience the joy and power of reading.

Walter Dean Myers, if joy is a teacher, you are the master instructor. You are a gift ― our ode to joy. And now, in this CBC series so aptly entitled “It’s Possible,” the time has come to pay tribute to your enduring legacy.

Please let us return your gifts to you.

Andrea Davis Pinkney is the New York Times bestselling and award winning author of many books for children and young adults. She is also Vice President, Executive Editor at Scholastic, where she served as Walter’s editor. Andrea has been named among the “25 Most Influential Black Women in Business” by The Network Journal, and is the mom of two incredible teens who love to read.