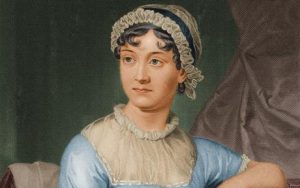 Austen was in her 30s, undergoing a period of financial difficulty following her father’s death, when she began publishing her work. Though her writing was praised by critics, the author’s identity was concealed from the public until after her death in 1817. Within her brief lifetime, Austen crafted an impressive body of work, now widely acclaimed for its wit and social realism.

Austen’s novels can be appreciated on many levels: as biting social critique of Regency England’s class and gender roles, as “chick lit,” and everything in between. Her stories have inspired numerous retellings, from faithful film adaptation to outright parody. The Austen Project has 21st-century novelists putting their own spin on the canon. The breadth of adaptations, both in adult and YA genres, testifies to the writer’s enduring relevance. Her acute literary realism shines a light on the day-to-day experience of young women, and proves that their stories are worth telling.