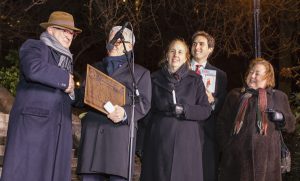 At the dedication ceremony, editor Beverly Horowitz of Delacorte Press called Harriet M. Welsch “the iconic New York character, a character unlike any other at the time, who paved the way for the books we read now.” She explained that the park “plays a major role in the book: Harriet lived down the street and went to school around the corner.” It was a key spot in Harriet’s spy route. (PW)