Diary of a Wimpy Kid: ‘The Long Haul’ Races to the Top of Bestseller Lists 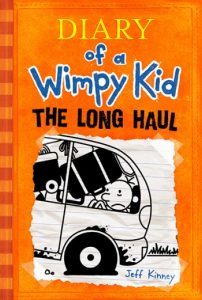 New York, NY – Amulet Books, an imprint of ABRAMS, announced today thatDiary of a Wimpy Kid: The Long Haul, the ninth book in Jeff Kinney’s blockbuster series (with the biggest U.S. first printing of any book in 2014, of 5.5 million copies) is the #1 bestseller in all English-language territories around the world, including the U.S.A., Canada, the U.K., Australia, and New Zealand. The book went on sale on November 4th, 2014. Jeff Kinney’s latest is rolling along as readers discover what life is like for the Heffley family as they endure an epic road trip. There are more than 150 million copies of all books in the series in print around the globe.

“Sales for Diary of a Wimpy Kid: The Long Haul out of the gate have been exceptional and are accelerating briskly. Already more than 1 million copies have sold in the first seven days,” says Michael Jacobs, president and CEO of ABRAMS. “Our strategy of releasing the new book simultaneously in all the English-language territories has shown the global power of Jeff’s books. With eight more countries set to publish The Long Haul before the end of the year, we’re confident that Diary of a Wimpy Kid will be number #1 around the world.”

The extensive U.S. campaign for Diary of a Wimpy Kid: The Long Haul began more than six months ago and was multifaceted. It included the first-ever worldwide cover reveal, a Geocaching promotion, and a nationwide summer promotion with Six Flags® theme parks. These efforts led up to the largest author tour ever for the series, lasting almost four weeks and with stops at more than 60 bookstores and schools in 20 cities. Large night events delivered a unique road trip experience with activities to engage fans while they wait to get their book signed by Jeff Kinney. On the eve of the book going on sale, November 4th, Kinney greeted more than 1,000 fans at an event on Long Island. The tour runs throughout November, concluding on the 25th. The Long Haul campaign continues as the Diary of a Wimpy Kid giant helium balloon appears for the fifth time in the Macy’s Thanksgiving Day Parade, on Thursday, November 27, and through print, online, and television ads. Kinney will visit the U.K. and France in December.

Now with more then 150 million books in print worldwide, the Diary of a Wimpy Kid series has been a fixture on the USA Today, Wall Street Journal, andPublishers Weekly bestseller lists. The series has remained consistently on the New York Times lists since the publication of the first book. The books have been sold in more than 44 territories in 42 languages. Published by Amulet Books, an imprint of ABRAMS, Kinney’s work has been widely praised for its ability to turn reluctant readers on to books. Jeff Kinney was named one of Time magazine’s most influential people in the world. Three movies based on the book series have grossed more than $250 million internationally. The book series won Nickelodeon Kids’ Choice Awards in 2010, 2011, 2012, and 2014, and Jeff Kinney won a Children’s Choice Book Award in 2012 and 2013. Books in the series have won numerous awards voted on by students and teachers around the globe.