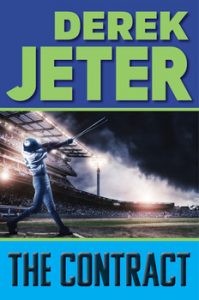 “His inspirational children’s novel, The Contract, is set to go on sale Tuesday, the first title off the presses of his new company, Jeter Publishing, an imprint of Simon & Schuster…Jeter’s novel really doesn’t stray far from his real-life storyline: his fictional mother and father are a biracial couple, one a social worker, the other an accountant, just like those of the superstar. And both Jeters have a little sister named Sharlee. The fictional Derek Jeter boldly states in a school essay titled ‘My Dreams for the Future’ that he will play short for the Yankees.” (The New York Daily News)