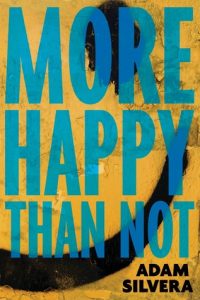 When writing diverse books, we’re writing about choices—and the things we can’t choose. Harry Potter could have chosen not to go to Hogwarts, but spending the rest of his youth with the incorrigible Dursleys would’ve sucked for all involved—Harry, the Dursleys, and the readers who became readers because of the boy wizard. Katniss Everdeen didn’t have to volunteer as tribute in The Hunger Games in place of Prim, but life in District 12 was bleak enough without watching someone act like her younger sister’s name wasn’t announced for a battle to the death. There are choices characters—and people—make because the alternative is simply unspeakable. But then there are the ones who don’t have a choice at all. They don’t choose to be Latino, they don’t choose mental illness, they don’t choose their sexual orientation. Who gives them a voice? I, along with many others, volunteer as tribute. I didn’t choose to be gay, but I’m happy I am because I would’ve never chosen this for myself, especially while growing up in the South Bronx. I wanted to explore this while writing my debut novel, More Happy Than Not, about a 16-year-old boy who wants to forget he’s gay with the help of a new memory-alteration procedure that’s recently become available to the public. If given the choice at sixteen to be straight, I think I would’ve taken it. I wouldn’t have to worry about coming out and whether or not my friends would accept me—I would be “normal.” Of course I later realized I was normal back then, just wired differently from what’s recognized as “normal.” Still, the desire to be in that “normal” category was strong.

I turned to books for guidance in my teen years, but the few books I dared to check out—I won’t out which ones they are—didn’t create an experience that was reflective of mine or even seemed legit. Not every book or film or TV show can recreate your childhood or a time of your life piece by piece, but if we want empathy for our differences, I think a first step is being conscious of creating a universal experience to unite us all instead of building walls like some exclusive clubhouse. And I think the universal experience is just a good story about identity.

But that’s where things get messy because discovering who we are is messy business. And if you’re not gay but want to write characters who are, don’t simply turn to current gay culture to craft your character. Common mistakes include gay guys being automatically interested in fashion and Lady Gaga, and lesbian girls competing in sports or fighting all the time. Guess what: you can be a straight guy who cares about your appearance or a straight girl who’s a ninja. The only thing that separates a straight person from a gay person is their respective attractions. That’s all. Put away the “Creating A Gayer Gay Character” checklist and whip out the “Creating A Fully Realized Character” checklist and ask yourself who the character is, not just who the character kisses.

Applause for the Below

Below is a list of novels that hit all the right chords for me: the characters aren’t token gays, their storylines move beyond their sexuality, and they’re just damn good. If you’re not already obsessed with them as I am, I hope you check them out. (Note: A number of the authors below writing about gay characters are straight. Imagine that.)

Aristotle and Dante Discover the Secrets of the Universe by Benjamin Alire Saenz.

I read this book twice within six months and it’s one of my all-time favorite novels. I related to Ari, an angry teen who deep down has an idea on who he is, but doesn’t accept himself, even when he meets the unforgettable Dante. From friendship to love, mysteries to discoveries, this book is a classic coming-of-age and coming out story.

2. TEENAGER WHO SHRUGS OFF BEING GAY

Put this book on your radar now because this is another novel I’m pissed I didn’t have as a teen. The cliché of gay teenagers hating being gay is probably left over from more intolerant times, but Becky Albertalli flips the script. Sixteen-year-old Simon Spier is at risk of being outed by a classmate, which pisses him off because no one really likes being blackmailed, but it’s not because he’s ashamed of being gay as it is about Simon moving at his own speed. And I love how Simon believes everyone should have to come out, gay and straight. This novel tackles identity with hilarity and wisdom.

3. WINNER OF GIVING CONVENTIONS THE BIRD

Ask the Passengers by A.S. King

Astrid Jones isn’t sure what to do with all the love inside of her so she plays a game where she sends love to passengers on overhead planes. Astrid and her friends are fully drawn out by the skilled hand of A.S. King—the same hand she uses to flip off the way society tries boxing people with labels.

So we’ve seen this cover, right? The photograph of two boys kissing? I’m ashamed to admit I took the book jacket off while reading it on the subway because I still carry around a fear I hope future generations won’t have to experience, but I applaud how brave and enlightening this Lambda-Award winning novel is. If David Levithan wants to write Two Boys Kissing 2/Two Boys (Still) Kissing/Two More Boys Kissing, whatever, I’ll be just as fearless as this novel and proudly rock the jacket next time.

5. THE BFFS WHO ARE GAY BUT AREN’T THE GAY BFFS

Noggin by John Corey Whaley and Winger by Andrew Smith

Kyle in Corey Whaley’s surreal Noggin and Joey in Andrew Smith’s extraordinary Winger are close friends to their respective narrators, but they are both so layered they could’ve easily had their own books. Many times secondary characters who happen to be gay are hopelessly cliché and one dimensional, but not Kyle and Joey. (Someone get to work on the Kyle/Joey buddy cop movie, please.)

Adam Silvera is the young adult author of More Happy Than Not, due out from Soho Teen on June 16th, 2015. He is tall for no reason and can be found online at adamsilverawrites.com and on twitter @adamsilvera.