‘Who Was…?’ Wrap Your Head Around History! 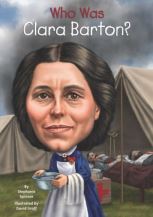 NEW YORK, NY — Since its launch in 2002, Grosset & Dunlap’s Who Was…? series has sold more than twelve million books, making it the most popular biography series for children. Perfectly aligned with the Common Core curriculum, this series features cultural icons from throughout history and today, crossing race, religion, ethnicity, gender, and field of achievement, from Leonardo da Vinci to Barack Obama.

The overwhelming popularity of the Who Was…? series has inspired two spin-off series – ¿Quien fue…? (for Spanish language readers) and What Was…?, which focuses on major historical events. In February 2015, Grosset & Dunlap will launch a third spin-off, Where Is…?, which will introduce young readers to sites of historical and cultural significance. The first four of these are Where is the Grand Canyon?, Where is the Great Wall?, Where is the White House?, and Where is Mount Rushmore?.

Grosset & Dunlap VP and editor-at-large Jane O’Connor is the mastermind behind Who Was…?, having come up with the idea after recognizing a need for biographies for early middle-graders: “I felt that there were a lot of beginning reader books on famous people, and a lot of thick books for older kids, but there seemed to be a hole in that 7-to-10 age level,” she said. “I wanted to publish a series of books that are over 100 pages so that they’d be eligible for book reports. And I was an obsessive reader of biographies as a child, so that was also part of the inspiration for the series.”

The series’ extraordinary sales numbers are a testament to the fact that children’s nonfiction is not just for the classroom. The books are a natural go-to for papers and research projects, but with their quirky cover art and illustrations, and novel-like prose, they have been able to find a place in both the academic and consumer marketplace.

Grosset & Dunlap just wrapped up the Who Was…? book contest, which ran from March 1st – June 1st, allowed readers from all over the country to cast their vote at their local bookstore or online for the personality they wanted to see featured as the 100th biography in the series. The contest was a popular one, having garnered over 67,000 votes! With 14,000 votes to his name, we are pleased to announce that Australian wildlife expert Steve Irwin is the winner. The diverse group of runners up included religious icon Mother Teresa, the country music group Florida Georgia Line, King of Pop Michael Jackson, and Kenyan political and environmental activist Wangari Maathai.

PRAISE FOR THE WHO WAS…? SERIES

“As an educator, I have found the Who Was…? series most helpful in meeting the needs of my gifted students in grades 3-5. Even the most reluctant readers are hooked by the bold caricatures on each cover. They delight and savor the little known facts about notables from every walk of life and pepper them as sound bytes in conversations with friends and family. It is rare to find a nonfiction series that embraces and engages all levels and interest of learners so strongly. My students are inspired by historical and current individuals who have touched the world. Each book in the series nurtures lively debates in the classroom and exciting projects across the curriculum. Our favorite project was creating a Who Was online social network, similar to Facebook. Students used higher level thinking skills to critically analyze and synthesize commonalities among individuals. What would Amelia Earhart have in common with Neil Armstrong? What would they post on each other’s Facebook page? This is a series that educates young minds and makes them aspire to be future leaders.” — Julia Dweck, Elementary School Educator

NEW AND UPCOMING RELEASES IN GROSSET & DUNLAP’S WHO WAS…? AND WHAT WAS? SERIES: