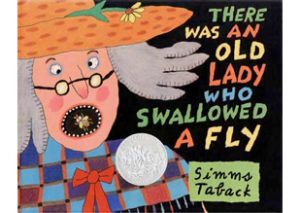 Amherst, MA (April 28, 2014)— The Eric Carle Museum of Picture Book Art is pleased to announce an exhibition of work by acclaimed children’s book author and illustrator Simms Taback. Simms Taback: Art by Design, on view from June 28 through November 2, 2014, celebrates the gifted artist, who decided shortly before his death in 2011 to give a significant part of his archive to the Museum’s permanent collection. Taback made the decision, which his family later saw through, as a way of recognizing the work that Eric and Barbara Carle did to create a Museum honoring the art of the picture book.

The exhibition will survey Taback’s eight major books, including his Caldecott Medal Book, Joseph Had a Little Overcoat, and his Caldecott Honor Book, I Know an Old Lady Who Swallowed a Fly. Taback’s irrepressible humor shines through in his colorful, beautifully-crafted compositions and lively storytelling.

Simms Taback was born in New York City in 1932 and grew up in the Bronx. Embracing his artistic talents from the start, Taback attended the High School of Music & Art and then graduated from The Cooper Union for the Advancement of Art. His first job was as a graphic designer for The New York Times; he then went on to work for Columbia Records, and subsequently served as an art director for a pharmaceutical advertising firm.

In addition to his commercial work, Taback began illustrating children’s books as early as 1964—with poems of Lewis Carroll. His second book Please Share that Peanut!, written by Seslye Joslin, garnered a New York Times Best Illustrated Book recognition for 1965. Though none of his early efforts were commercial successes, Taback’s career remained a mixture of commercial art and children’s-book illustration.

His breakthrough in children’s books came with the publication of There Was an Old Lady Who Swallowed a Fly in 1997, a playful adaptation of a popular children’s song, with die-cut pages used to great comedic effect. He received a Caldecott Honor for it in 1998. Two years later, Taback earned the Caldecott Medal for Joseph Had a Little Overcoat, this time using his innovative die-cut pages and bold, graphic style to tell a Jewish folk tale. These two books secured his reputation as a major presence in the field and permitted him the luxury of doing books on his own terms.

Filled with joyful detail, hand-crafted lettering, and simple, childlike imagery, Taback’s work bears a strong resemblance to folk art. Taback himself noted, “My interests and influences have been art created by children and ‘outsider art,’ the folk art of unschooled artists like the work of the Reverend Howard Finster. I have been inspired by Paul Klee, Saul Steinberg, early animated films, and the circus figures of Alexander Calder.” This visual style complements his storytelling, which derives from an interest in folk tales, nursery rhymes, and the Jewish oral tradition—evident in books such as This is the House That Jack Built (2002), adapted from an old children’s poem, and Kibitzers and Fools (2005), a collection of thirteen Yiddish folk tales.

This show is the second in an ongoing series highlighting The Carle’s permanent collection, and it will be accompanied by a sixteen-page illustrated brochure with an essay by The Carle’s Chief Curator Nick Clark.  On view will be the original artwork from eight of his picture books, as well as preliminary drafts which reveal his love of folk art and storytelling and his strong foundation in graphic design. The visitor will gain greater insight into the disciplined process and extraordinarily high standards to which Taback held himself. Support for Simms Taback: Art by Design has been generously provided by Penguin Young Readers Group.

It is a thrill—though bittersweet—to celebrate the life’s work of such a humorous, warm, and vibrant illustrator,” says Clark. “We are honored to introduce Taback’s illustrations to our collection and look forward to sharing them with the public.”

The mission of The Eric Carle Museum of Picture Book Art, a non-profit organization in Amherst, MA, is to inspire a love of art and reading through picture books.  The only full-scale museum of its kind in the United States, The Carle collects, preserves, presents, and celebrates picture books and picture book illustrations from around the world.  In addition to underscoring the cultural, historical, and artistic significance of picture books and their art form, The Carle offers educational programs that provide a foundation for arts integration and literacy.

Eric and Barbara Carle founded the Museum in November 2002.  Eric Carle is the renowned author and illustrator of more than 70 books, including the 1969 classic The Very Hungry Caterpillar.  Since opening, the 40,000-square foot facility has served more than half a million visitors, including 30,000 schoolchildren.  Its extensive resources include a collection of more than 12,000 picture book illustrations, three art galleries, an art studio, a theater, picture book and scholarly libraries, and educational programs for families, scholars, educators, and schoolchildren.  Educational offerings include professional training for educators around the country.  Museum hours are Tuesday through Friday 10 a.m. to 4 p.m., Saturday 10 a.m. to 5 p.m., and Sunday 12 noon to 5 p.m.  Open Mondays in July and August and during MA school vacation weeks.  Admission is $9 for adults, $6 for children under 18, and $22.50 for a family of four.  For further information and directions, call 413-658-1100 or visit the Museum’s website at www.carlemuseum.org.