President Snow, The Harry Potter Alliance, and Project for Awesome 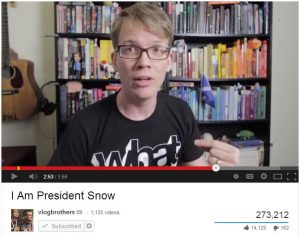 “I just want to point out that inequality is not the result of animosity; it is just the result of the status quo. It’s complacence that causes it, not evil. It’s just the simplest path. Like, I probably spent enough money on fancy dinners with my wife this year to save the lives of other people. […] That makes me President Snow. I’m not evil–but I am complacent in that system. And just like Katniss doesn’t hate Effie, I don’t hate myself for that. But I do recognize that because inequality is the path of least resistance, we have to have structures to fight against it.”

Green also draws attention to the Harry Potter Alliance, a charity dedicated to taking the lessons we learn in YA books and using them to make the world a better place. He also mentions Project For Awesome, the online event that he and John host every year on Dec. 17th, in which vloggers upload videos asking the public to support their favorite charity.