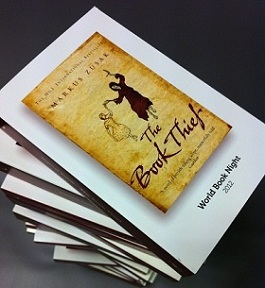 This year’s “list includes the first graphic novel, first university press title and first Asian-American authors. As before, one book is in English and Spanish, and two are available in large-print editions. In addition, the 35 titles were an increase from the previous years’ 30, allowing more authors and publishers to be represented.”

The Perks of Being a Wallflower by Stephen Chbosky
The Ruins of Gorlan: The Ranger’s Apprentice (Book 1) by John Flanagan
Hoot by Carl Hiaasen
Enchanted by Alethea Kontis
Sunrise Over Fallujah by Walter Dean Myers
Bridge to Terabithia by Katherine Paterson
Miss Peregrine’s Home for Peculiar Children by Ransom Riggs
Code Name Verity by Elizabeth Wein