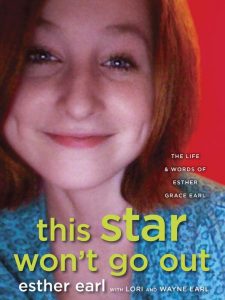 Esther Earl met John Green at a 2009 convention for Harry Potter fans, and went on to inspire John Green’s characterization of Hazel in his smash hit The Fault in Our Stars. While Esther died of thyroid cancer in 2012, at age sixteen, her voice will live on in Dutton publication This Star Won’t Go Out: The Life and Words of Esther Grace Earl, to be released on January 28, 2014. The book is  a collection of Earl’s letters, journal entries and short stories.