The Epic Movie Adaptation to be Released in May 2013 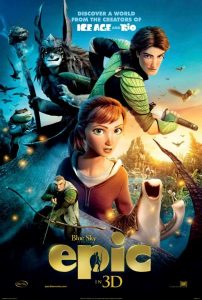 “The movie is directed by Chris Wedge (the Ice Age franchise, which has grossed over $700 million domestically) and premieres on May 24. Joyce, who teamed with Wedge on Robots (2005), was a producer for the film and contributed to the screenplay. The Leaf Men and the Brave Good Bugs is about a small but powerful army of elfin insects that square off against a wicked Spider Queen to protect their garden. The film expands significantly on that storyline by restaging the action in a hidden forest land called Moonhaven and introducing a teenage protagonist.”