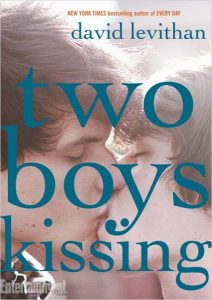 “Scholastic Publisher and Editorial Director David Levithan (the same Levithan behind Two Boys Kissing, Invisibility, and 2003’s Boy Meets Boy) told me that the environment for gay characters in Y.A. literature has indeed changed remarkably in the past 10 years. ‘If 2003 was the sea change year for gay Y.A., in which the world did not end because there were lots of gay Y.A. books, in which we were pushing down the door and getting in,’ he says, 2013 represents another wave of change. ‘For so many years, so many characters have been defined by their sexuality—they’re ‘gay’; we don’t have to give them any other characteristics,’ he says. ‘But gay characters and gay kids have lots of other things going on. No one is just this one thing.’ In these new books, being gay or bi or lesbian or transgendered is wrapped up in conversations of identity that often transcend sexuality, and ask what happens beyond acknowledgment, coming out, and even generalized acceptance of one’s choices.”

more at The Atlantic Wire▸▸