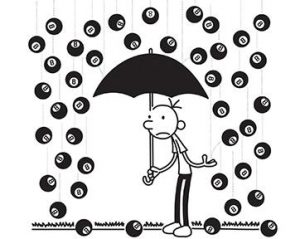 BOLOGNA, Italy, March 25, 2013—Today at the Bologna Children’s Book Fair, ABRAMS announced that its Amulet Books imprint will join forces with seven publishers around the world for a global release of the eighth book in the blockbuster Diary of a Wimpy Kid series. The release of the latest book is one of the most anticipated publishing releases of the year.

Diary of a Wimpy Kid Book 8 will go on sale in the United States in November 2013. The United Kingdom, Australia, Germany, Greece, Japan, Korea, and Norway will release the book in their respective territories just after the U.S. debut. An original new image by Jeff Kinney, featuring Greg Heffley under an umbrella being bombarded by raining Magic 8 balls, was revealed to tease fans about what might next happen to Greg Heffley.

“Never in my wildest dreams did I think that Greg Heffley’s stories would be enjoyed by this many kids around the world,” says Kinney. “I’m incredibly excited that ABRAMS is launching the newest Diary of a Wimpy Kid book with an international release of this size.”

Following major marketing and social media promotions in the U.S. for the November 2013 release, international partners will launch their respective campaigns around the world as fans cheer the arrival of the newest Diary of a Wimpy Kid story.

Published by Amulet Books, an imprint of ABRAMS, Kinney’s work has been widely praised for its ability to turn reluctant readers on to books. More than 85 million Diary of a Wimpy Kid books are in print around the world. The books have been sold in more than 44 territories in 42 languages. Jeff Kinney was named one of Time magazine’s most influential people in the world. Three movies based on the book series have grossed more than $250 million internationally. The book series won Nickelodeon Kids’ Choice Awards in 2010, 2011, and 2012 (and is nominated for one in 2013), and Jeff Kinney won a Children’s Choice Book Award in 2012. The books have won numerous awards voted on by students and teachers around the globe. The Wimpy Kid Island on poptropica.com, a virtual world for kids, remains one of the most visited on the site.