Lemony Snicket Unveils the Cover for When Did You See Her Last? 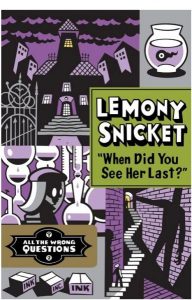 Snicket announced this news by having a “top secret” conversation with Why We Broke Up author Daniel Handler. The publisher released the first installment, Who Could That Be at This Hour?, on October 23, 2012. Graphic novelist Seth created the illustrations for both book one and the forthcoming title.